Des Moines Public Schools is proud of the recognition that our Students First projects have received, especially in terms of energy conservation and efficiency which equate to more dollars available for what matters most: educating our students.

This recognition is really an honor for all of Des Moines, and the shared commitment to providing students throughout our community with great places to learn.

Major honors earned by DMPS are highlighted below. 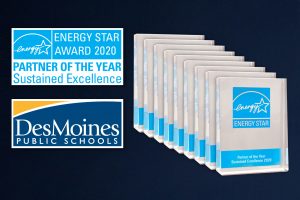 Des Moines Public Schools was one of the first school districts in the nation to earn the U.S. Department of Education’s Green Ribbon Schools Award in 2013 for our district-wide conservation and efficiency work.

Des Moines Public Schools was awarded the State of Iowa Governor’s Iowa Environmental Excellence Award in 2013 and 2016.  The Governor’s Award was presented for the District’s wide-reaching efforts to implement and promote energy efficiency, environmental awareness and sustainable strategies.