Iowa Seal of Biliteracy and DMPS

Preparing Students from Around the World for the World 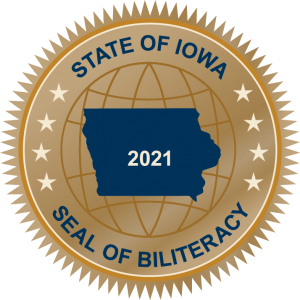 Des Moines Public Schools educates students from around the world. Our students come to Des Moines from a hundred different nations and speak more than 80 languages and dialects.

At the same time, DMPS educates students to be prepared to go out and succeed in the world, including a robust World Languages curriculum. That’s one reason DMPS is participating in the Iowa Seal of Biliteracy program.

The Seal of Biliteracy is an award given by the district to recognize students who have attained proficiency in two or more languages, one of which is English, by high school graduation. Some of the goals of this new effort include:

WHY IS THE SEAL OF BILITERACY IMPORTANT?

Being able to know and use more than one language is a critical skill for the 21st century. The seal of Biliteracy:

For more information about the Iowa Seal of Biliteracy, visit the Iowa Department of Education website.