When a story getting national new coverage takes place on a high school campus, what should student-journalists do? For the staff of East High School’s Scroll newspaper the answer was straight-forward: their job.

The coverage of a March 7 drive-by shooting on the edge of East’s campus – which left one teenager dead and two students injured – and its aftermath was one reason the Scroll staff has been named the News Team of the Year by the Iowa High School Press Association. From coverage of the event itself to later interviews with the victims, the staff of the Scroll were on top of a story that they experienced as East students but also was part of a national story about gun violence and school shootings.

“The judges said they were impressed with how the Scroll staff handled their coverage of the shooting on East’s campus. The students knew that they needed to cover a very tough topic and went about it in a way that was respectful to the victims and provided the information that the community needed, as disinformation after the event was a huge problem. Students also gained so much experience from covering such a serious event,” said Natalie Niemeyer-Lorenz, East’s journalism teacher and faculty advisor to the school’s newspaper and yearbook.

“I am so proud of this team and Ms. Niemeyer-Lorenz.  Her guidance and support lead these students to produce truly remarkable work,” said East principal Jill Versteeg. “The students work so hard, tirelessly churning out quality news stories and feature articles. They go to countless events capturing students at their at best, and they shed light on areas we need to examine and potentially improve. Recognition like this means so much to them and will continue to feed their journalistic spirit. They make the whole East community proud.”

East shared the stage with two other DMPS high school newspapers who also earned “best news team” honors: the Hoover Challenger and the North Oracle. The award is the equivalent of a state championship for student newspapers. IHSPA awards five titles each year, one from each of three classes and two at-large. This is the first time a single school district has earned three such titles in the same year. Sarah Hamilton is the faculty advisory for the Hoover Challenger and Jenn Epping for the North Oracle.

“Students at DMPS are capable of so much and these awards show that,” added Niemeyer-Lorenz, who is also a past president of IHSPA. “Students in our district know that they are supported in free speech.”

Student-journalists gathered at the University of Iowa’s Memorial Union for the Fall 2022 IHSPA conference. They attended workshops on topics ranging from the First Amendment to making editorial decisions to improving graphic design to making the best use of social media. They also had a chance to tour the university’s journalism school and its student-run news organizations. In one session, editors from the East Scroll as well as the Quill, the school’s yearbook, were part of a panel discussion with their counterparts from Iowa City High School, discussing and answering questions from their peers around the state about leading successful student publications.

While East, Hoover and North students earned honors as the top student news teams, Hoover’s Sarah Hamilton was recognized as the state’s top journalism teacher. She was presented with the Rod Vahl Award as the top educator and faculty advisor in the field. Hamilton is the third DMPS teacher to be awarded this honor in the past ten years.

“Ms. Hamilton is one of the most highly effective educators I have ever had the pleasure of working with. She teaches more preps than any other teacher in the building and still delivers quality instruction,” said Qynne Kelly, principal at Hoover High School. “Students genuinely enjoy her and the culture she has established in her classroom. Her program is one that I would point to as an opportunity for students to develop and demonstrate leadership that will go beyond their high school years. Ms. Hamilton is also quick to support others. She is hosting a student teacher, nominates her colleagues for awards, and does a nice job celebrating her students’ achievements. I am thrilled that she is being celebrated today, she deserves it!”

Hamilton, who last year received the High School Teacher of Excellence Award from the Iowa Council of Teachers of English, said one of her priorities is providing students with real-world opportunities in her classes so they are prepared for life and work after high school.

“By integrating real world situations into my curriculum, my students are better prepared for their future,” Hamilton said. “My students understand the expectations employers expect of them and feel confident handling them as they have already been put in those situations in my classroom. They are working with technology that media professionals currently use. In this digital age, it is important students are exposed to the types of tasks they will be asked to perform. Journalists no longer just write stories for a newspaper or magazine – they must be able to multi-task and do a little bit of everything from posting to social media to recording video to writing a script. And, in my classroom, my students do all of that.” 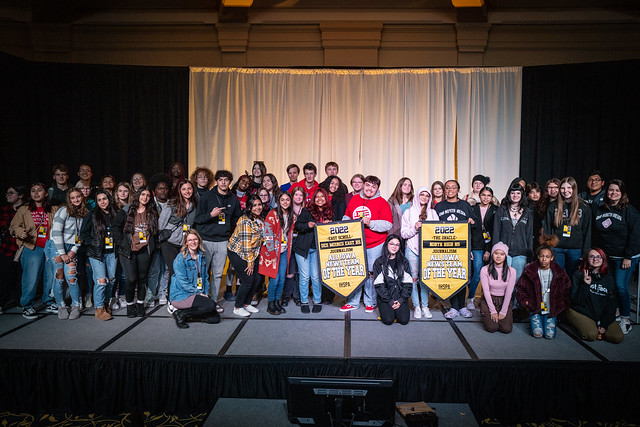