According to Google Maps, it’s a 6.6-mile drive from Hoover High School to East High’s Williams Stadium. That cross-town jaunt is the distance the coach of a cross-town rival will travel to take the helm of the Scarlets football program.

Tyrone Tyler is currently the football coach of the Hoover Huskies. On Wednesday morning, he met with players from his new team at East High School. The move is a homecoming of sorts for Tyler.

“I’m excited to coach on Des Moines’ East side as that is where I grew up. I went to Douglas as well as Hoyt, and played youth baseball at Grandview, so it excites me to be able to return to a community that I know,” said Tyler.

As a football player, Tyler earned all-state honors in high school and was selected for the annual Iowa Shrine Bowl. As a collegiate player at St. Ambrose University, he received conference and league recognitions as a top running back and wide receiver before playing professionally in the Arena Football League. When Tyler began his coaching career, East was his first stop where he was the sophomore coordinator.

As one coach noted: “Tyrone Tyler bleeds football and has a great ability to connect usable skills that youth need to excel.”

“East has a rich tradition I hope to build upon. I’ve watched my older brother (Class of ’88) play for the Scarlets and have success as a Hall of Fame inductee, as well watching my nephew who was a Scarlet in 2013,” added Tyler. “I’m ready to mentor, teach, share the game and build something special on the east side. Once an East Sider, always an East Sider!”

“East is very excited to welcome Coach Tyrone Tyler to the Scarlet family,” noted J.R. Randall, East’s activities director. “Tyrone has a very strong passion and knowledge of the game of football, a tireless work ethic, and believes in developing young men through athletics and the life lessons these experiences provide. We are very excited to see the impact he will have on the young people at East.”

UPDATE ON HOOVER FOOTBALL: Because participation at football has been lower than wished at Hoover High School, and is projected to remain so next year, the school has notified the Iowa High School Athletic Association that it will not compete in varsity football next season. This decision was driven by concerns over injuries and safety for student-athletes. However, Hoover students will continue to have opportunities to play football as the school and DMPS are considering options for a cooperative agreement with other Des Moines high schools. 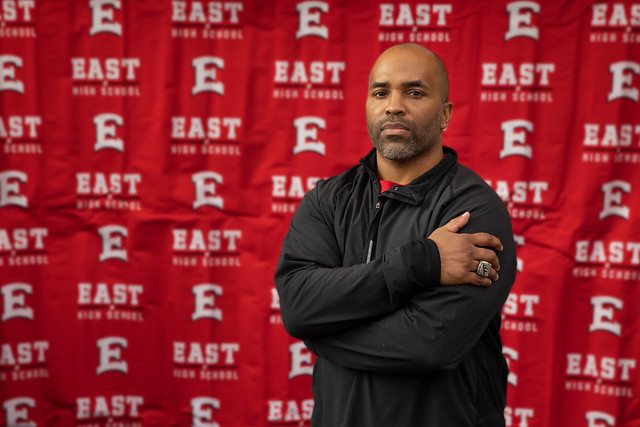