Most of us are familiar with the venues used for sports. There’s the gridiron (football), the court (basketball or tennis), the pitch (soccer), the diamond (baseball or softball), and so on.

But don’t forget about an increasingly important competitive venue: the screen.

At Lincoln High School, students have an opportunity to compete in esports, a chance to use their gaming and technology know-how to face off against students from across Iowa and the Midwest in games such as League of Legends, Super Smash Brothers, Rocket League and more.

Electronic gaming is nothing new, of course. For instance, Pong – one of the first popular video games – turns 50 years old next year. Since that time advancements in computer technology and the connectivity of the internet have raised gaming to a new level.

Today, more than a billion dollars a year are spent on things such as sponsorships and television rights for competitive esports. The web site Twitch, a popular streaming service for video games and esport tournaments, has more than 100 million viewers each month. And video game industry as a whole is now larger than the movie industry.

Teacher Will Kramer is the coach of Lincoln’s esport team. He is working to grow the program as well as hold it to the same academic standards as other activities and athletics.

“It is very similar in terms of other clubs and athletics in terms of making sure the students are keeping up on their grades. This has been a great incentive for the students who want to play in their matchup each week,” noted Kramer. “It has been great to see the students create new relationships and interact with other students who have the same interests and hobbies as them.”

Kramer is helped by Talmadge Keown, a special education associate at Lincoln, in coaching the team.

On a recent Wednesday afternoon the team gathered in Lincoln’s library, controllers in hand and games projected large onto walls and screens. A few pizzas provided some fuel for the afternoon. Today’s competition was Super Smash Brothers, a game featuring a line-up of Mario and other Nintendo characters. The competitions take place on PlayVS, a special gaming platform used by high school and college esport teams. Lincoln is in the Central division, going up against other high school teams from Iowa, Minnesota, North Dakota and Wisconsin. In high school teams compete in two 8-week seasons: one that runs until early December and another that begins in February.

Darron Kitterman is the technology integration coordinator at Lincoln and a proponent of the school’s esports initiative.

“Every teenager needs a placed to belong, and the more diverse range of sports and clubs a school can offer, the better,” he noted. “Studies show that involvement in extra-curricular activities reduce absenteeism, reduce drop-outs and improve academic performance.”

Kitterman notes a long list of the benefits Esports can provide students: 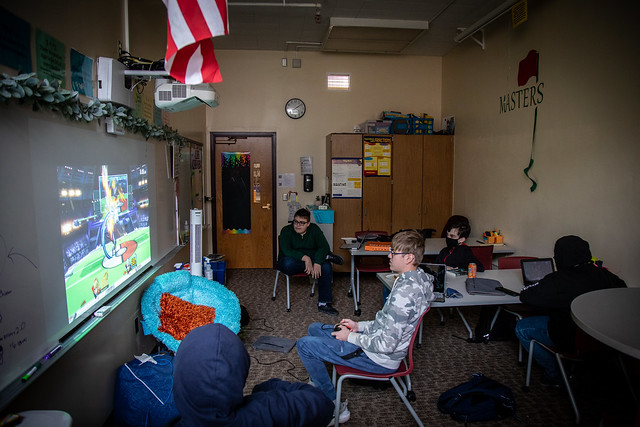