Every once in a while you’ll spot a Little League or high school player in Des Moines wearing the number 56. It’s a sign Major League Baseball umpire Eric Cooper has impacted someone’s life in his hometown.

“He was always giving away his equipment,” longtime friend Joe Nelson said. “He was that kind of guy.”

On Saturday, Cooper’s legacy was established in a more permanent way outside Hoover High School, where four new batting cages were officially dedicated to his memory.

Cooper graduated from Hoover High School in 1985, attended Iowa State University, and umpired his way through the minors and into the big leagues. In 2014, he was called to umpire the World Series. The Des Moines Register called him “one of the most respected umpires in the game.”

His friends remember him as a humble guy who was full of stories and knew no strangers.

“When you walked into Wellman’s (Pub) with Coop, everyone knew him,” said Nelson. “He was like a celebrity. But he never lost sight of what was important.”

“He had a lot of loves. First, Coop loved his family. He was so proud of them. I would ask him, ‘How does it feel to have your mom and dad sitting in the stands at Yankee Stadium watching you work?’ He always came back to, ‘It’s a great feeling to hug your mom after a major league game.'”

Standing next to a photo of Cooper and the sign designating “Coop’s Cages,” HHS Director of Student Activities and School Equity Jacob Burke talked to the crowd gathered for the ceremony about how the old high school cages were gravel, on a slant, broken down, and were scheduled for replacement. The Hoover-Meredith booster club raised around $24,000 and the district planned to prepare the space and lay the concrete, but Cooper’s family took the project from good to great.

He turned to Cooper’s family and added, “Thank you. I hope this gives you something to come back to often and just remember him.”

Cooper’s friend and fellow umpire Mike Everett reminded everyone how special and fleeting life can be, barely holding back tears.

“What a beautiful dedication this is for a dear friend, brother and son,” he said. “Hug it out every day. Tell someone you love them. Tell them you care for them. Because we just never know.”

Following the ceremony, everyone was invited into the gym for coffee, doughnuts and to talk baseball and share stories about their favorite umpire.

Just the way Coop would have liked it. 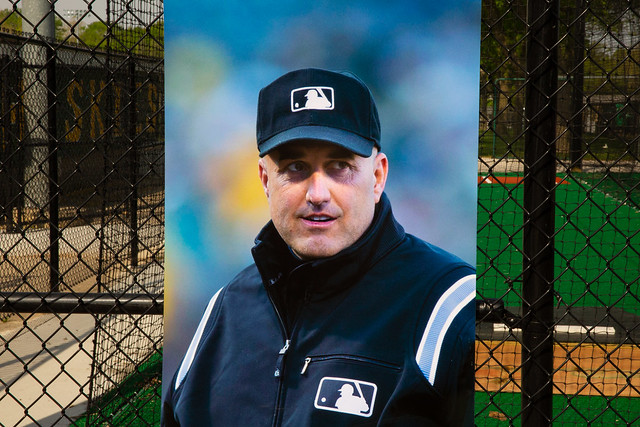