Understandably, uncertainty surrounding how and when to begin the 2020-21 school year is foremost in most people’s minds right now. But before all attention turns to those concerns, a proper share was paid on Saturday to the last batch of graduates from the DMPS Class of 2020.

The summer commencement ceremonies held at North High School included graduates from all five of the district’s comprehensive high schools as well as Options Academy, PLACE and Scavo High. This summer added 112 new members to the Class of 2020 at DMPS. On Saturday many of them, along with a couple of guests, arrived at North for the final personal commencement of the year, welcomed by a DJ spinning tunes in the parking lot as they headed indoors to be recognized the same way as their peers had been at eight previous events.

Some of those Scavo grads are sterling silver linings to the dark COVID cloud that’s hung over everyone and everything since last spring.

Carmon Rasmussen is the counselor at Scavo, which is transitioning from a standalone full-service high school to program status. She’s transferring to Hoyt Middle School. But first…

“I’m writing to see if you are interested in sharing a final story or two about our Scavo students and staff,” she emailed several weeks ago. “We have been working on courses towards graduation from our homes since March and amazing stories have surfaced.”

Like Javier Rodriguez and Gabby Pineda-Galan. They’re a couple. Since Javier lost his father last year, they’ve lived together with Gabby’s family. They work together at McDonald’s. And throughout this spring and summer they’ve also worked together on graduating from high school, burning the virtual midnight oil under the tutelage of Scavo’s Academic Interventionist Rose Neal who was happy to adjust her own schedule to make it compatible with theirs.

“I needed to be flexible,” Neal said. “We had so much trauma with the announcement of the school closing and then COVID-19. Instruction did not go well in the spring because my office hours were when students were working. So, during summer school, I was able to meet with students when it worked for them. Thus the late evening sessions. I was very fulfilled working with students virtually. I was able to connect with them and overcome their phobias of learning online.”

Neal was there on Saturday when Javier and Gabby pulled up in a pickup truck festooned for the occasion. Decked out in matching caps and gowns, they couldn’t stop smiling at one another. When asked who pushed whom the most to stick with those late night summer sessions after long days at work, they agreed that it was Gabby who encouraged Javier to believe that he could catch up in time for them to graduate together, like they do everything else.

Tinajee Lee couldn’t be there for the ceremony that had to be rescheduled from August 15 due to damages the North campus sustained during the recent derecho. She was out of state over the weekend but Rasmussen said a driveway diploma event will be arranged just for her next week.

“She too did her schoolwork in the middle of the night,” Rasmussen said. “She has been caring for her three-year-old sister and two-year-old nephew every day, yet she completed 14 courses this summer. Her perseverance is inspiring.”

And then there’s the, uh, surprising Ricky Gross-Lopez.

Ricky’s 19 and has been off and on at Scavo since 2016 while holding down a full-time job as a supervisor at Blue Beacon Truck Wash.

“He’s very kind, one of the kindest people I have ever met,” said Rasmussen. “His attendance was very inconsistent. Then we moved to distance learning. Over spring break, I reviewed student academic plans and noticed that Ricky was very close and with focused work he could graduate. I called him. He was all in. So we started.”

All of which was unbeknownst to Ricky’s mom, Hayde, who he invited out to lunch on Saturday. Sure, she said, and away they went. Just one brief side errand, Ricky said after he got his mom in the car. He needed to drop by North to drop something off or pick something up. Maybe his pretext sounded vague and fishy to Hayde but whatever, she was along for the ride.

When they turned into the parking lot it was obvious that an event was underway. Grads in gowns were everywhere. Still, when Rasmussen greeted them in the driveway and said “Let’s go graduate!” Hayde was caught off guard.

“You’re graduating?!” she turned and shouted to her chauffeur. “Oh, this has been a long time coming!”

Summer commencement has been an annual event at DMPS since 2011, but the irony of the cases in point singled out this year by Rasmussen is that their progress was accelerated by the pandemic.

“If it weren’t for the district having to shut down and us being relegated to working from home, none of these kids would be graduating today,” she said. “It’s opened our eyes to effective new ways of tailoring instruction to their situations.”

So, all of the uncertainty looming over 2020-21 notwithstanding, let’s close the book on 2019-20 with a batch of happy, and unlikely, endings.

Photos of the Class of 2020 Summer Commencement Event 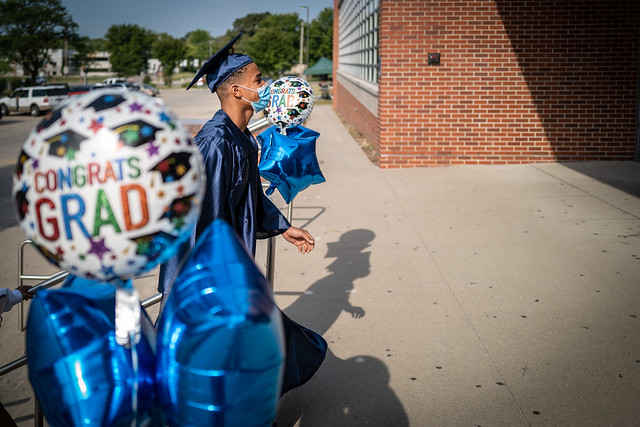