Class of 2020 Endures, Excels Thru “Tragedies and Triumphs”

Commencement 2020 at Des Moines Public Schools, the “personal” one like none other, is a wrap. Delayed by the COVID-19 public health crisis, then distracted by nationwide protests in response to the death in police custody of George Floyd, this Class of ’20 would not be denied.

What started with a trickle of grads on June 3 and 5 from alternative programs at Focus and Scavo kicked into high gear on June 6 and 7 at Hoover and North. Following a week’s intermission, the parade of graduates resumed last weekend.

At East on June 13 they rolled out the Scarlet carpet for the Class of 2020.

Class valedictorian Cameron Mohne declared, “We’ve endured and excelled,” through “tragedies and triumphs.” Headed to prestigious Stanford University to study math and computer science, Mohne’s next graduation gown will only be a shade different. After four years with the Scarlet, he’ll now be among the Cardinal; the color, not the bird.

At Lincoln the following day, June 14, Principal Paul Williamson addressed the cultural context head-on in his remarks. “You have endured too much,” he said. “But I encourage you to engage in the fight against systemic racism and for social justice. We can’t be perfect but we can be better. I challenge each of you to be better.”

In her letter to the Class of 2020, Spanish teacher Amanda Simons told the new Rails grads, “You can be assured that the classes that came before you, and that will come after you, admire your resilience and bravery in the face of this heartache.”

Finally, it was Roosevelt’s turn on June 20.

Principal Kevin Biggs opened the ceremonies there by acknowledging the Black Lives Matter movement and declaring “You can listen to silence and learn from it, so I invite you to join me in a moment of silence.”

There were traditionally lighthearted and celebratory aspects befitting of each occasion besides those customized to these unusually troubled times. At Roosevelt, seniors received various tongue-in-cheek trophies in addition to their diplomas and academic distinctions. Gary Quinn, for instance, was named Most Likely To Be Late For His Own Wedding.

But it was neither a student nor an educator who delivered maybe the most poignant perspective of this especially historic commencement season. It was a grieving mother.

Faduma Ahmed’s son Abdullahi Sharif was a Roosevelt senior who went missing on January 17. His body was discovered in the Des Moines River on May 2 and the circumstances that led to his death remain a mystery.

Still swirling in the midst of her personal maelstrom, Ahmed summoned the grace to deliver a statement as part of Roosevelt’s program.

“I have waited for this day 12 years,” she said. “While it is sad to see Abdi’s empty seat, it makes me happy to see his classmates graduate. I have some advice for all of you. I want you to go and graduate from college and then help in your communities…”

The original plan under these extreme circumstances was for a virtual commencement to be held for each school on June 27, but the Class of 2020 asked for something more personal. What they got, besides their diplomas, was a chance for some meaningful closure.

And the response by the Class of 2020 to this new approach was overwhelming. At the eight personal commencement events, totaling over 50 hours, 5,000 graduates and their guests arrived. In fact, 9 out of 10 eligible graduates throughout the school district participated.

To auditoriums at Hoover and North; to gyms at East and Roosevelt; to the student commons at Lincoln, they arrived by appointment, one by one, as though for an audition, not a graduation. And each of them, from Jennifer Alexandra Aguilar at Hoover at 9:00 AM on June 6 to Lauren Page Zenti at Roosevelt at 9:00 PM on June 20, got the part they’d been working toward since kindergarten: the starring role in The Graduate.

Besides closure they got their own personal moment on the stage, not as one of hundreds of others, but more privately; more intimately with no one watching save parents, school officials and the yeomen manning the cameras who bore witness to every last one of them in methodical events that lasted up to 12 hours depending on class size.

All of the pictures taken during the eight “personal commencement” exercises held between June 3 and June 20 fit into this big one: more than the moment and the immediate circumstances, graduation is a wistful look back and an eager look ahead.

Congratulations, and maybe just a pinch of consolation, DMPS Class of 2020!

Photos from all Eight Class of 2020 Personal Commencements 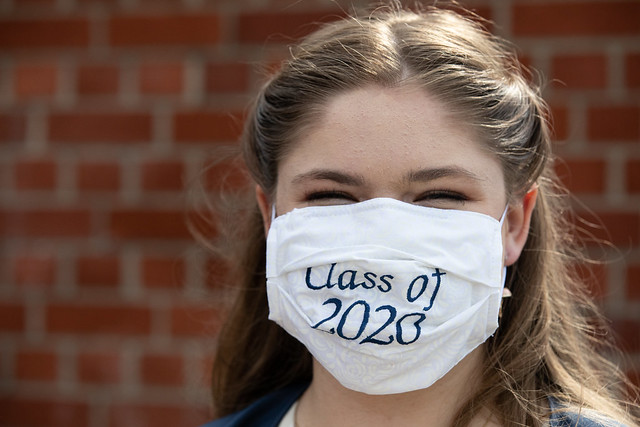