Life Goes On for Animals Down on the DMPS Farm

Last fall, a blind date of sorts was arranged between “Mama” Goat from the Central Campus agriculture program and a fella whose name we didn’t get. They rendezvoused in a pasture near Runnells and nature took its course.

That was about five months ago. Five days ago, “Mama” gave birth to twin kids, a pair of still unnamed boys born in the midst of a maelstrom that began when nature veered off its normal course a few months ago, halfway around the world.

Emma Ashton is a junior at Hoover High School and Bailee Smith is a senior at East. They’re two of the 22 members of the student chore team assigned by Kevin Anderson who teaches Animal Science & Horticulture in the nation’s largest secondary school student-run greenhouse and livestock facility, housed at the district’s southern edge along County Line Road.

“They (the goat brothers) were born on my birthday (March 18),” said Emma during a pause in her chores Monday morning, cradling one of the boys. “They’re doing very well so far.”

Add two more to the growing list of livestock bred and raised by an urban school district in a largely rural state. According to Bailee, the tally now is fifty chickens, seven sheep and seven goats (a number about to change when “Dixie” also gives birth, any day now).

That’s not including pigs, more of which are on the way after the last bunch went to market earlier in the year.

“There will be 40 animals delivered to the school farm…for summer fair projects,” said Anderson from the self-quarantine quarters he’s currently confined to after returning from a trip abroad. Students who routinely care for all of the animals twice daily, 365 days of the year, are allowed to continue doing so under current circumstances because the federal government declared agriculture essential work during the coronavirus shutdown.

The CC agriculture program will expand its reach with a farm-to-market grocery store that’s in the planning stages and will include an aquaponics aspect where tilapia and other market fish will be raised.

Emma and Bailee are both pursuing interests that come naturally to them even though they’ve grown up in the state’s largest city.

“My Dad grew up on a farm,” said Bailee. “My grandparents still own that farm in northeast Iowa and I’ve spent a lot of time there during my life.” Ag is in her blood.

As for Emma, “I’ve always wanted to be an equine veterinarian,” she said, “for as long as I can remember. Besides my classes here I also get to help out with the horses at Jester Park.”

Enough talk! Time to deworm the goats and sheep, as Bailee and Emma provide each animal with a dose to keep them healthy.

Back to work, which is never done on a farm. Good thing, most of the time, that the labors are ones of love.

“Mr. Anderson always tells us not to name our farm animals,” said Emma. “He reminds us that it’s tough if we get too attached,” because the relationships are short-term and, primarily, practical.

“But there is an emotional aspect,” Emma said. “Every summer at the end of the fair, all of a sudden they call your name and you lead your animal(s) to a trailer and you realize that’s it, you’ll never see them again.”

Both are in the nature of things, the animals’ fate and the humans’ heartache. 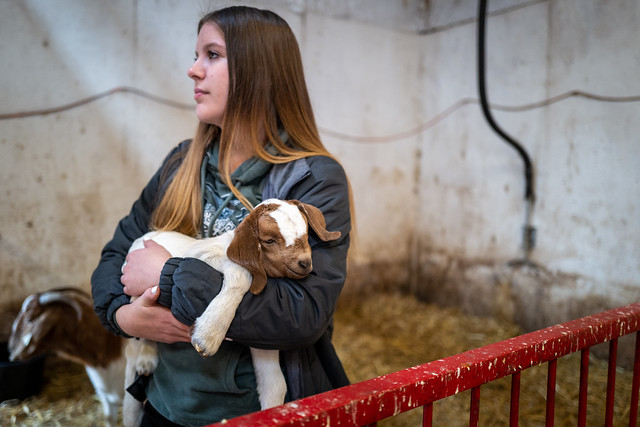