“Everyone Counts” on Census Day at River Woods Elementary

2020 is a census year, when all of the people living in the United States are counted. The census is important because it determines everything from congressional representation to the distribution of billions of dollars in federal funds. The results will impact our community for the next decade. In mid-March, households in Des Moines and across the country will begin receiving information about how to complete the census. From time to time DMPS will be sharing information and reminders for our families about the census, such as this report about an event at River Woods Elementary School. For more information, be sure to visit the Census 2020 web site.

A real VIP (Very Important Population) event happened on Monday at River Woods Elementary, about everyone standing up to be counted, literally. There are no celebs when it comes to the census. Like the song sung at the assembly says, “Everyone Counts.”

It’s a once-every-decade American tradition that’s been happening since the first one in 1790. That means the 2020 census that officially starts next month will only be #23, roughly half the number of presidents America has elected. The results will determine many important things, from the allocation of limited government resources to the number of representatives each state is allotted in Congress.

River Woods wasn’t chosen as a site for a Census Day event because the mascot is an eagle, same as America. It’s the hub of a region the US Census Bureau determined was undercounted in 2010. When the school was first approached about hosting, principal Traci Shipley was excited.

“Our theme all year has been Cultivating Connections,” she said. “We’ve been emphasizing getting our parents engaged and involved in lots of different ways and this fits perfectly with that idea.”

Indeed, the official census is the ultimate family event.

Besides two assemblies in the school gym, classroom activities at River Woods were also census-centric, from the song everyone’s been learning in music class to math exercises like the ones going on in Mr. Poole’s 5th grade section. There, students used a formula of two “tokens” per thousand people to get an idea how cities and towns ranging in scale from Pigeon Forge, Tennessee (population approximately 7,000) to Boston, Massachusetts (approx. 700,000) go about municipal planning and prioritizing with regard to everything from public safety issues like police and fire departments to lifestyle perks like parks.

Though it doesn’t happen on a daily basis like reciting the Pledge of Allegiance does at River Woods, the census is even more quintessentially American, since it predates the POA by about a century. It amounts to taking attendance in America every time a year ending in zero rolls around.

Another key point in schools like River Woods, where Shipley says students come from homes where more than 20 different languages are spoken, and school districts like DMPS, where native tongues number nearly 100, is that English is not the only language of the US Census, far from it.

The online census comes in 13 different languages and video/print user guides are available in a total of 59, plus American Sign Language (ASL), Braille, and large print English.

Census data is vital to the distribution of over $675 billion for programs including the National School Lunch Program, among many others. However, children, minorities and those living in poverty are historically undercounted.

Not this time. Everyone knows the answer(s). Everyone needs to raise a hand. 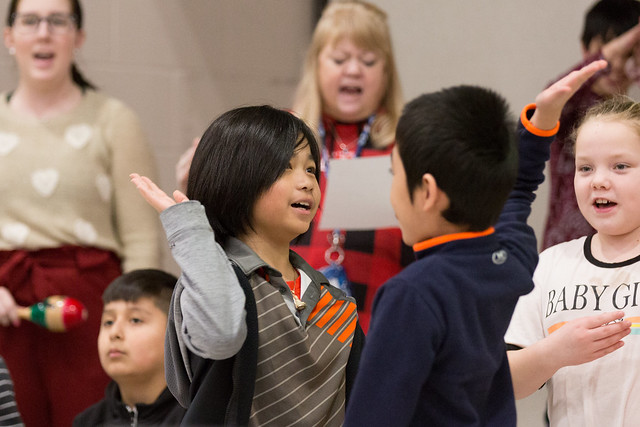