Tuesday evening the Iowa Supreme Court held an open session in the auditorium at North High School. It was a special occasion, Constitution Day, in America and getting out of its regular chambers to let the community see how its work is done up close is how a court throws a party.

It’s one thing to have posters up on the classroom wall about the U.S. Constitution and the three branches of government, as Room 144 at North does, but it’s another to have the sitting Chief Justice of the state Supreme Court come and speak about those topics.

“Our Constitution turns 232 years old today,” Cady told the students. “You know, it’s not very long really, 4,500 words or so, about the same as a term paper, but it’s profound and it still serves as the expression of the principles and values we all share.”

Cady cited some landmark rulings by the highest court of them all, the US Supreme Court, that are relevant to students and education all over the country and have especially direct local links.

Brown v. Board of Education established in 1954 that segregated public schools are unconstitutional.

“Here in Iowa, we were the first state to ban segregated schools in Clark v. Board of Directors and that was in 1868, 86 years before Brown,” Cady said.

And of course, no judicial discussion at North would be complete without a citation of the Tinker v. Des Moines Independent Schools SCOTUS ruling in 1969 that addressed the terms and conditions of students’ freedom of speech while at school. Plaintiffs Mary Beth and John Tinker attended Harding Junior High and North, respectively, when they wore black armbands to class in silent protest of the Vietnam War, thereby also establishing the precedent that students from the Northside of Des Moines are absolutely capable of setting examples and blazing trails for generations to come.

Tuesday night the court heard oral arguments in the case of State of Iowa v. Kari Lee Fogg, from Boone County, one that turns on the 4th amendment protection against unreasonable searches and seizures.

Not exactly the stuff of cakes and candles, but still, wishes for many happy returns of the day were ruled to be in order. 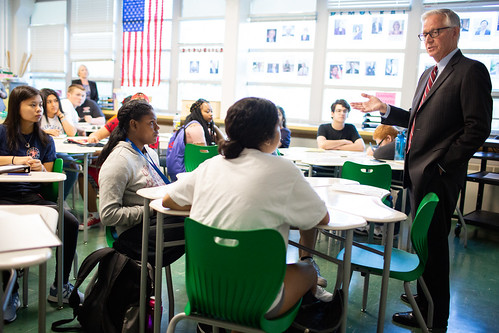