Dueling pianos is a popular entertainment format known to get a crowd rocking and rolling.

Dueling parades can have a variation of the same effect on a school district, especially at the front end of a new year.

After tiptoeing into the 2019-20 school year for the first few days, it’s forward march, full speed ahead for DMPS now, led by two annual events at Westside elementary schools that coincided for the first time Friday morning.

Cowles Montessori has been staging its Peace Walk on or around Maria Montessori’s birthday (August 31) for 27 years now. The natural exuberance that goes along with it is very much in the spirit of the event which honors the founder of the eponymous educational movement with peace as a central tenet.

“We discovered that our route through the neighborhood this year is in the shape of a ‘P’,” said Cowles principal Todd Johnson while his at once tranquil and energetic troops assembled on the playground before parading back through their building, out the front door and around their territory. “That wasn’t by design,” according to Johnson, but maybe it wasn’t an accident either.

The anthem for their event was Light a Candle for Peace, and though the marchers didn’t actually carry candles, they were armed with banners and placards that stated their case for global harmony.

World peace remains an elusive goal, but Cowles continues doing its part for the cause. What started as a one-room preschool experiment more than a quarter century ago is now a unique school that’s more than 400 students (plus a waiting list) strong.

Meanwhile, a couple of miles away the Perkins Penguins were massing on their grounds, anxious to make their annual rounds in celebration of the new school year.

Residents lined the curbs of the square block south of the school. Parents, grandparents, younger “future Penguin” siblings and even some pets joined the ranks of marchers. Balloons bobbed above their heads, some of them escaping to soar up, up and away like a time lapse of what’s in store for the young students.

Rank has its privileges, right, so kindergartners fell in right behind Perkins principal Michael Derrick at the head of the parade. Through his bullhorn, Derrick set the tone with chants that first cheered the police escort provided by the DMPD before proceeding on to teachers by name and eventually a steady drumbeat of “Per-kins Pen-guins! Per-kins Peng-uins!”

Tonight the high school football season begins and marching bands will get in step right behind Cowles and Perkins.

It feels like it’s going to be a very good year.

Photos of the Cowles and Perkins Parades 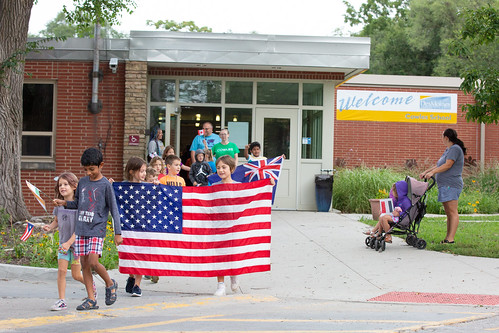