Hillis’s Heidi Slinker is Izaak Walton Teacher of the Year

In the spirit of Mary, Mary, Quite Contrary…

Hillis, Hillis
Tell us, tell us
How does your garden grow?

Heidi Slinker!
How can we thank her?
Izaak Walton should know

Okay, enough with the nursery rhymes, let’s just share the news that Heidi Slinker, a 14-year veteran teacher at Hillis Elementary School, has been named the 2019 Teacher of the Year by the Des Moines chapter of the Izaak Walton League in recognition of her stewardship of the school garden and her collaboration with the FoodCorps program at Hillis.

The Izaak Walton League is one of the nation’s oldest conservation advocates. Slinker received her award at a banquet on May 21, but what happened Wednesday morning at school was, by design, a big surprise.

The rains that have played havoc with spring sports schedules and elementary Field Day celebrations around the district relented long enough for everyone, students and staff, to secretly gather outside at where they shouted and cheered when the guest of honor appeared.

Principal Renee Gelfond recalled her impressions of the grounds at Hillis when she began her assignment there.

“Four and a half years ago, I saw this green space that we have and thought it was so beautiful,” she said. “And then I wondered how we would ever take care of it. One teacher, in particular, took responsibility for that. She’s out here after school and on weekends and during the summers, too. And today we want to thank her for everything she does.”

At that point, and a couple of others during the brief ceremony that included the presentation of gifts to Slinker, applause rained down upon her, which was a nice change from the precipitation that she and other local gardening types have been battling so far this growing season.

There aren’t any silver bells or cockleshells in the Hillis garden, but it WILL yield plenty of produce.

“I promise, the garden will look better when school starts again than it does now,” said Slinker, though award-winning is hard to top.

She’ll have her crops, and the chickens in the school coop, “all in a row,” along with a fresh batch of students. 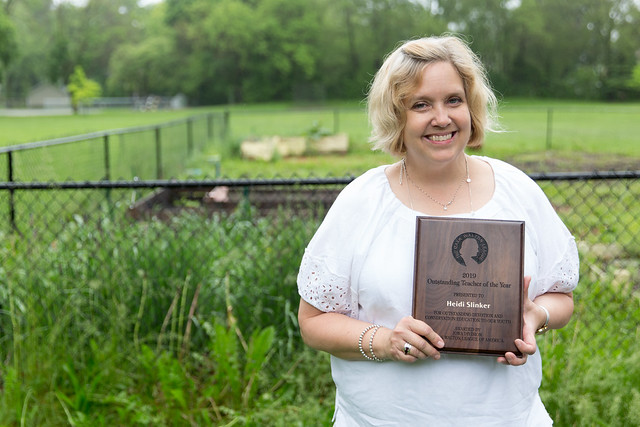