Aaand ACTION! As in Latinos in Action.

East High School is now officially the home of Iowa’s first chapter of LIA, a national nonprofit that’s on the grow.

LIA is in ten other states and more than 200 other schools from coast to coast, California to New York, with nearly 10,000 student members who boast a collective graduation rate of 98%.

Wednesday afternoon, LIA’s founder and CEO, Dr. Jose Enriquez, delivered a dynamic invitation to an audience drawn from 180 Hispanic students at East who were nominated by teachers for possible membership. They came with curiosity and left with applications.

LIA is not an extracurricular activity, it’s a leadership course embedded within participating students’ regular schedules and classwork. One element is regular visitations at elementary and middle schools to serve as role models for younger students and tutor them in literacy.

Hispanics are the largest demographic at East where they comprise 36% of the student body, so Enriquez came to the right place for a Midwest branch expansion. He was there because Steven Schappaugh, School Improvement Leader at East, learned about LIA from a colleague during an unrelated January trip to Broward County, Florida.

“He shared his LIA experience and materials with me and I shared them with our team at East,” said Schappaugh at Wednesday’s assembly. “I reviewed them and reached out to Jose and here we are.”

Enriquez shared his powerful personal narrative with the East students and it resonated.

His story began in El Salvador before winding through East Los Angeles en route to Utah, of all places. He rebuffed the gangs that tried to recruit him in LA and was later recruited to attend Brigham Young University on a wrestling scholarship. Now he travels the country recruiting student leaders to follow his example.

“When I stepped on to that stage to receive my PhD (in Educational Leadership),” he recalled, “I thought of everything my mother went through to get me where I was and I realized that I was giving her the best thank you possible. The first time I heard them call me ‘Doctor,’ it was delicious.”

The applause he received wasn’t the polite kind. It was the real thing, the duly impressed, tell-us-more kind. It happened repeatedly.

Enriquez stressed the distinction between jobs and professions, and the importance of bilingualism.

“Anyone can get a job,” he said. “You need to become professionals. Already you are bilingual. Combine that with education and people will come looking to hire you.”

The plan initially is to offer one section of the yearlong LIA leadership course starting next fall. Interested students will submit their applications to East’s Community in Schools Coordinator Tonie Valadez by May 17 for consideration to land one of a maximum of 35 spots. It looked and sounded likely at the assembly that there won’t be room for the entire first batch of applicants.

Ruby Herrera currently teaches AP Spanish at East. Next year she will add LIA Leadership to her course load and she can hardly wait.

“Yes, this is going to be so exciting,” she said. “And not just for our students at East who will join the class. Also for the students at the feeder schools they will work with.”

The big, happy “famiLIA” that Dr. Enriquez started in 2001 just got a lot bigger and happier.

(*UPDATE: When the application period closed, 60 were submitted for the 35 available spots.)

Photos of Latinos in Action Signup at East 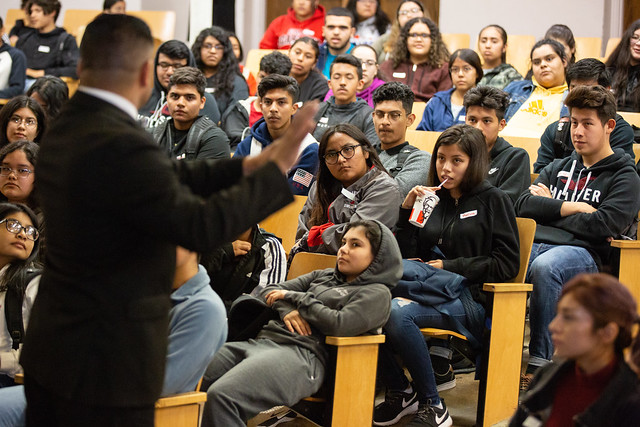