Lily Eskelsen García is president of the National Education Association, the nation’s largest labor union. She began her career in education as a school lunch lady and now leads a professional organization representing 3 million educators from one end of the country to the other.

In town for an NEA conference, she insisted on visiting some local examples of a burgeoning movement unassumingly referred to as community schools. Sometimes the prefix full-service is attached, and that at least hints at what’s provided by community schools besides education.

Garcia knew she’d come to a good place for an up close look at a concept that’s on the rise around the country because DMPS recently received a $2.5 million federal grant that will enable expansion of the district’s community school cohort into a total of 18 buildings.

Garcia and her counterparts at the local and state level visited Monroe Elementary School on Wednesday morning, and went from there to Central Campus/Scavo, hosted by the DMPS community schools leadership team of Allyson Vukovich, Jill Padgett and Vanessa Howell.

At Monroe, Community Services Coordinator Lesley Christensen, who’s in her third year there, briefed the entourage on the school’s outreach.

“It’s amazing to see all of the pieces of our efforts coming together,” Christensen said of a concept based on the fundamental principle that before children can be effectively taught they must first be adequately clothed and fed and sheltered. “Our network includes the management of the apartment complexes where many of our families live, area businesses, the police, neighborhood churches and the city parks & rec department.” Support ranges from school supplies to swimming lessons.

A brief tour of the school stopped first at the food pantry that’s open to Monroe families every Tuesday and Thursday after school, according to the regularly looping message programmed into the school sign out front. The pantry is wedged into space at the back of the school auditorium. From there, it was downstairs to what used to be just the basement/boiler room but now also serves as a clothing closet, neatly organized by gender and size.

“When our families outgrow clothes they recycle them back to us for others to use,” Christensen said. “And our staff – their contribution is huge. They all bring stuff from home.”

The locals were hardly proselytizing the visitors. More like preaching to the choir.

“NEA has been very involved in promoting the community school model across the country,” said DMEA President Josh Brown, who, along with ISEA President Mike Beranek, accompanied Garcia on her DMPS whirlwind tour.

Garcia herself is a big believer, one whose classroom background was elementary teaching in Utah.

“When I talk to politicians I tell them that community schools are the right way to reform education,” she said, “instead of for-profit charters or private school vouchers. We’re talking about reform of people’s hearts and minds; about whole communities putting their arms around the whole child.”

Next week, Garcia and other NEA officials will have the opportunity to enlighten newly elected members of the next Congress that convenes in January.

Having a full-time, fully committed advocate on staff like Christensen, one of the benefits that will accrue from the recently secured federal grant, enables schools in need to tap into an often untapped reservoir of community goodwill. When people realize the need at schools like Monroe, where 98% of the students live in some degree of poverty and 46% are ELL (English Language Learners), many are quick to respond. Raised consciousness = raised money (and other resources). If adequate school funding isn’t built into public policy that doesn’t mean it can’t be mustered by other means.

The official DMPS vision is to become the model for urban education. An implicit prerequisite to realization of that vision may be first to become a model for (full-service) community schools. And that may be why the tour at Monroe didn’t drop in on a 1st grade classroom until after the guests had been to the food pantry and the clothing closet.

Then it was on to the onsite medical/dental clinics and daycare center at Central Campus. Model facilities by any standard. 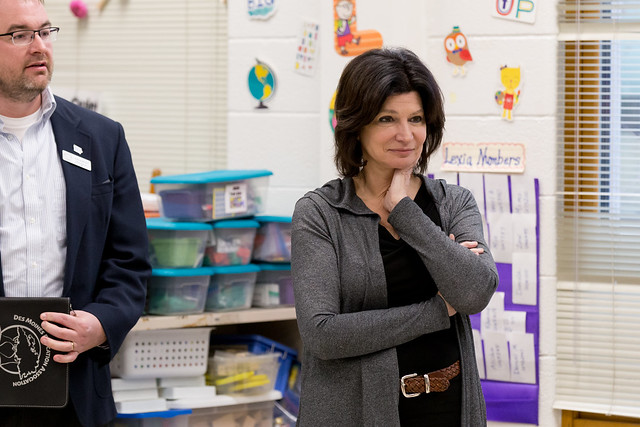