Roosevelt High School was the site Monday morning for an important announcement about a new battlefront in the fight to stem the opioid epidemic plaguing the nation.

UnityPoint Health announced its sponsorship of a national education program for high school students about the dangers of prescription drug abuse. DMPS is the first school district in Iowa to implement the course that will be offered free of charge to other school districts across the state in communities served by UnityPoint.

The pilot cohort is one section of a required freshman course at Roosevelt called Future Ready taught by Alison Thompson.

“We got access to Prescription Drug Safety last week,” Thompson said about the course that’s accessed online and developed by EVERFI, a national educational technology innovator. “It’s part of our Future Ready unit on health. So far, the students seem to like that it’s digital content.”

Under Iowa law, beginning with the class of 2017, all students must complete coursework in Financial Literacy, Health Literacy, Technology Literacy, and Employability Skills as a requirement for high school graduation.

Twenty-first century living requires more than the practical stuff that used to be lumped under the umbrella of Home Economics.

The formal launch of the new course coincides with Red Ribbon Week, a national spotlight on prevention and treatment of drug abuse.

At a press conference in the Roosevelt library, students heard grim statistics, including that 1/3 of teens see nothing wrong with trying prescription drugs prescribed for someone else and that 1/5 report having done so.

Besides outlining the scope of the problem, the course, which rolled out nationwide last year and reached more than 57,000 students at 800+ schools, aims to teach students refusal skills and how to identify and support peers who develop opioid dependency.

Following remarks by Roosevelt principal Kevin Biggs and UnityPoint and EVERFI officials, Thompson’s class broke into small groups for guided discussions about their impressions of the course, stigma associated with addiction, community resources available for those struggling with a drug problem and the extent of abuse they see among their peers.

Passage of the law referenced above was intended to ensure that students leave high school with some competency in fundamental life skills. The addition of Prescription Drug Safety to the “Future Ready” 9th grade curriculum at one district high school suggests that a healthy level of consciousness about the ubiquitous menace of prescription drug abuse is one of those.

Photos from Launch of the Prescription Drug Safety Network 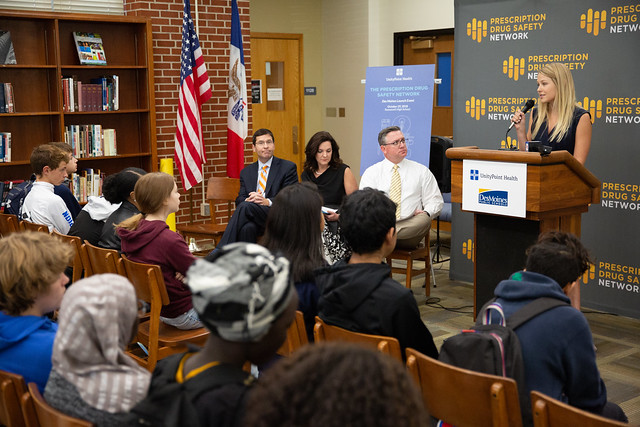