2018-19 marks the centennial year for Windsor Elementary School, and that calls for some special celebration – and decoration!

Current students are painting a mural on a retaining wall that borders a parking lot at the school. Fourth and fifth graders did most of the conceptual brainstorming, but everybody’s making their mark on the project. Tuesday after lunch, an enthusiastic bunch of kindergarteners (do they come in any other flavor?) slapped on first their smocks and then their finishing touches, under the watchful, reparative eye of art teacher Kathleen Warren. Her boldest stroke on the ambitious masterpiece may have been turning five- and six-year-olds loose with paint and brushes – outdoors!

“Remember,” she told them, “if it starts to drip, wipe it on the lip,” which she demonstrated with a brush and can. “But not these lips!” shouted the painters in unison, pointing at their smiley mouths.

The theme of the concrete canvas can be summed up as the four Ls: Live, Laugh, Love and Learn. When Windsor opened, schools stuck pretty much to the original three Rs: Reading, (W)riting and ‘Rithmetic. A lot has changed in a century. See for yourself in this excerpt from a historical summary of the school district that was compiled in 1976:

The original Windsor building in 1918 was a two- room brick structure that housed 22 pupils in the primary grades. The teacher had to walk from the end of the street car line on 49th street and University. The nurse came about once a month, but the first one gave up because she did not wish to walk from 49th to 58th street particularly since it was hilly. Mr. Jordan, the first principal had nine small out-lying schools. This kept him busy because transportation was slow and in some places nonexistent. When the first Armistice report was announced in November, 1918 (declaring the end of WWI), schools were closed for the rest of the day-but not Windsor. It had no telephone and thus did not hear the news. Water was provided by a well and the pump was locked or the handle removed at night to prevent the well from being pumped dry before the pupils arrived the next day.

Toward one end of the mural, standing tall and basking in the sunshine beaming from the upper left corner, is an image of a brick schoolhouse, created by students a hundred years later, full of color and imagination that cameras back in the day couldn’t capture.

So far, so good, Windsor. 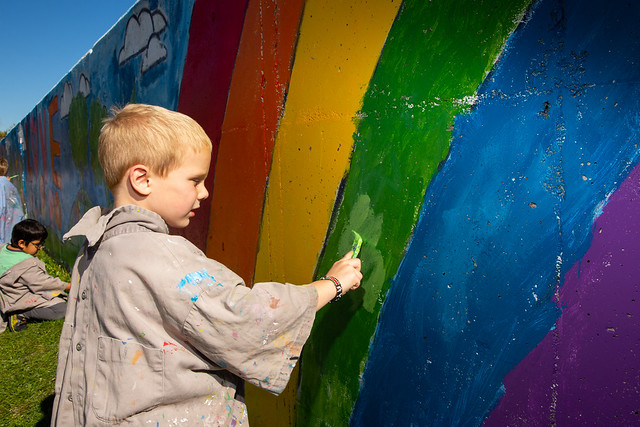