While the veterans educators – from Des Moines and throughout the country – were downtown at the Iowa Events Center attending the third annual DMPS Summit on School Climate & Culture, the district is also busy this week coordinating orientation activities for its newest teachers.

Tuesday morning at East High, 124 rookies who are brand new to the profession reported for preliminary duties that included cutting through red tape and a welcome message from DMPS Associate Superintendent Matt Smith. Their agenda also called for some procedural breakout sessions followed by deployment out to their assigned schools after lunch. Wednesday morning another 130 with prior experience in other districts will begin learning how it’s done in the state’s largest school district, one that aspires to become the model for urban education.

There is no shortage of students, but increasingly, there is a shortage of teachers. The competition is fierce for the most promising ones so it was appropriate that Smith’s remarks to the newcomers included an expression of gratitude.

“Thank you for choosing DMPS,” he said. “We are glad and proud to have you join us in this calling.”

Before Human Resources Benefits Specialist Rhonda Wagoner outlined the district’s attractive perks package, Smith also talked about the intangible benefits that accrue to practitioners of a noble, vital profession, one that’s inherently life-changing for teacher and student alike. The work that teachers do has never been more critical, Smith told this fresh batch.

One among them who is about to begin a career he’s long aspired to is Jonathan Greiner, who was hired to teach 9th and 10th grade English, Social Science and Social Skills at Ruby Van Meter High School.

Greiner grew up in Indianola and graduated from Simpson College there before gravitating to Des Moines for the sort of job he sought.

“Going through school I always felt lucky for all of the blessings I enjoyed,” Greiner said, “and empathy for kids with disabilities. I tried to find ways to include them and draw them into the group and I am excited now about getting to teach at a school as special as Ruby Van Meter. Des Moines is the best district in the state. Yes, I guess I do feel called to teach.”

More excited than apprehensive, he said, with the first day in charge of his classroom barely another week away.

If there isn’t necessarily the quantity of candidates that school district HR departments would like, at least there are enough benefits, tangible and otherwise, in this exceptional one to attract the highest quality; the cream of a dwindling crop.

Eager to change the world, Greiner and the rest of the 2018-19 DMPS rookies are certain to change someone’s.

Teachers can, and do.

Photos from the 2018 New Teacher Orientation 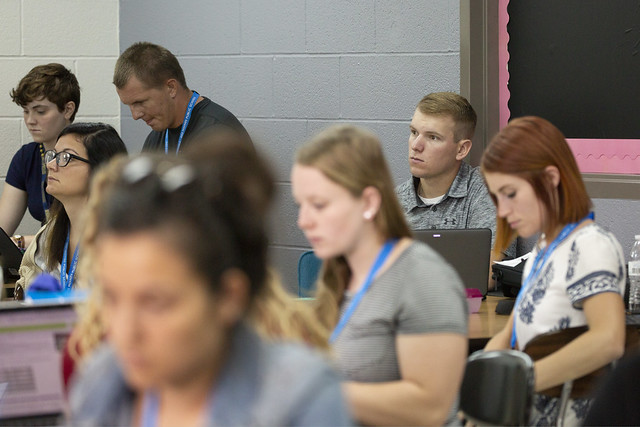