The 2018-19 school year begins districtwide on Thursday and there are symptoms everywhere of New Year Fever.

Many schools are hosting open houses Wednesday night on the eve of opening day. Teachers have been mailing postcards and making phone calls to their class rosters.

Brubaker Elementary School is so eager to get started, the teachers hit the streets on Tuesday.

For the second year in a row, Brubaker principal Mark Adams and his staff fanned out for a Welcome Walk around their neighborhood, meeting students and their families in their homes and inviting them to a carnival at the school Tuesday night. They bore gifts of Brubaker swag bags that included pencils and sharpeners, fridge magnet school calendars and notepads.

Reading/math interventionist Alyssa Briggs is in her 4th year at Brubaker and she paired off with 3rd grade teacher Heidi Lucs who’s been at the school since it opened in 2003. Together they strolled both sides of E. 42nd Street, knocking doors and extending invitations.

“I think this is a good idea,” said Lucs. “Even if people aren’t home we leave them a bag and a reminder about the carnival. It helps get everyone excited to start school.”

“This is a beautiful morning, too,” noted Briggs. “Last year we did this in the afternoon and it was so hot. Today is perfect for this and the carnival that happens later.”

One of the first doors they knocked on was answered by Ashley Stonebruner, whose daughter Lydia starts kindergarten later this week. Lydia was still asleep, but she and her mom are sharing some mixed feelings as a big day approaches.

“Lydia’s excited but also a little nervous,” said Stonebruner, who admitted to the same emotions, ones that families are experiencing all over town. “She’s been to preschool, though, so it’s going to be alright.”

Meanwhile, over on the Northside, the staff of Oak Park Elementary School was engaged in its own version of outreach. New principal Ryan Sharp and company were dispatched to perform assorted random acts of kindness through a teambuilding app that Sharp is using as a springboard to a yearlong emphasis on community engagement.

“Besides myself, there are several new teachers and support staff at Oak Park this year,” said Sharp. “This is a fun way to get acquainted with each other and the neighborhood we serve.”

Earlier in the day, the whole staff toured the Oak Park boundary area by bus to familiarize with their territory.

One Oak Park teacher who knows the lay of the Northside like the back of her hand is 2nd grade teacher Julie Mallas. 2018-19 is her 24th year at the school, the longest tenure in the building.

“We are excited about this year at Oak Park,” Mallas said. “Enthusiasm is high in this neighborhood. Last year I had 100% parent attendance at both my fall and spring conferences. People really care.”

Sharp created seven teams for a friendly competition to see who could score the most points by handing out compliments, helping folks with their groceries and lending a hand at charities. While his own team was standing outside of a grocery store on Euclid Avenue, a passerby mentioned that he thinks it’s too bad schools no longer recite the Pledge of Allegiance each day.

“Not true,” said Mallas’s fellow 2nd grade teacher Marie Simon, who’s about to begin her second year at Oak Park. “We say it every day.”

“I sure would like to hear it,” the man said, as if calling a bluff. At that, the whole team slapped hands on hearts and delivered the goods, a random act of citizenship that made someone smile.

Later, outside the Salvation Army Family Store and Donation Center a few blocks up the street, the new principal and his team broke into a “floss” flash-dance that drew some thumbs up and horn toots from passing traffic. 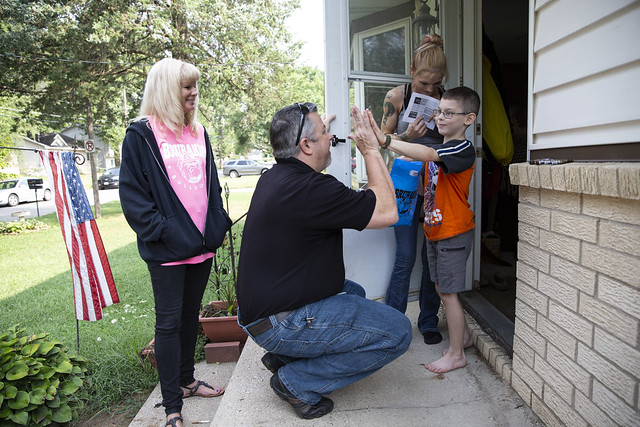