There is nothing rinky dinky about Ranky Tanky.

Hubbell Elementary music teacher Rebecca Hunt knew that, so when DMPS Fine & Performing Arts Curriculum Coordinator Kelly Kretschmer asked who might like to host a workshop with the band when Des Moines Performing Arts brought Ranky Tanky to town, Hunt jumped at the chance.

“Our music curriculum includes a unit about gospel/spiritual music,” Hunt said. “I thought our students would enjoy Ranky Tanky.”

Thursday afternoon Ranky Tanky warmed up for their evening performance at the Temple Theater by putting on a show for some lucky kindergartners and 4th graders in the Hubbell lunchroom.

The band is a soulful, playful quintet rapidly rising in the jazz ranks with its Gullah, Lowcountry sound rooted in the creole culture of South Carolina.

Late last year Ranky Tanky was invited to appear on NPR’s Fresh Air. In January, following the broadcast, RT’s eponymous debut album went to No. 1 on iTunes, Amazon and the Billboard jazz charts.

In between tunes at Hubbell, Singleton taught some audience participation in the form of a chanting refrain that began “eenie-meenie” and ended “X,Y,Z.” In between was a long string of Gullah scat and the 4th graders quickly became an enthusiastic chorus.

Members of the band took turns sharing personal backgrounds. There were examples of the timeless universality of sibling dynamics, the passport to world travel that music can provide and recollections of humble artistic beginnings.

Ross’s was the best.

“I wanted to play the guitar so bad,” he said. But at his elementary school he was issued a violin. “I turned it sideways and strummed it like it WAS a guitar.”

Later, Ross was a high school classmate of Chadwick Bozeman who plays the title role in the Hollywood mega blockbuster The Black Panther. The Hubbell kids were suitably impressed.

“Yes, he’s the Black Panther and has all those superpowers,” Ross said. “But he cannot play the guitar.”

Tickets were still available for the evening show downtown as of Thursday afternoon. But at prices ranging from $43-$57, how could it top the Hubbell sneak peek matinee?\ 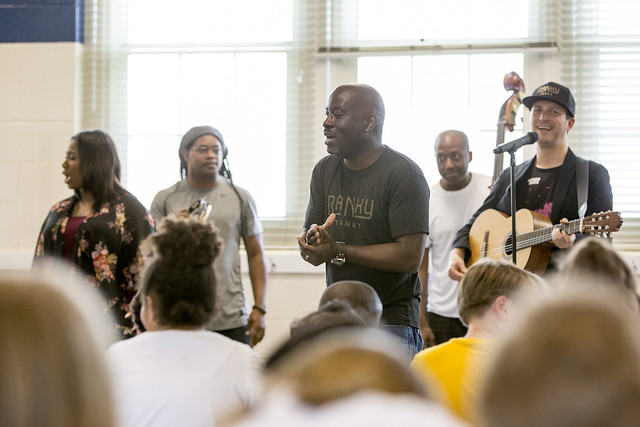