Jack and the Beanstalk and the Opera Come to Moore Elementary

This year’s OPERA Iowa tour of DMPS schools culminated Friday morning at Moore Elementary School where the grand finale performance was preceded by a behind-the-scenes workshop just for 3rd graders in the school’s music room.

Kyle and Cody (aka, The Giant) sparked a lively discussion the Moore 3rd graders were eager to take part in. Later, when they saw the show, they were in the loop as to special effects like lighting gels that establish moods and times of day and a crash box filled with broken glass that was used to simulate the sound of the giant’s fall from the beanstalk that Jack chopped down after his own descent.

During the post-show Q&A, they knew the answer to the question about whether or not it hurt when the giant’s wife came after him with a rolling pin: stage combat! It only appeared as though Giant Cody got bopped, he explained.

The staging effects of operatic storytelling are as magic as the beans Jack got in trade for his mother’s cow.

Fee-fi-fo-fum, what have they done to the gymnasium?

For at least a while, it’s going to feel like a giant’s castle.

Earlier tour stops included Hanawalt, Studebaker, and a deluxe performance hosted by Goodrell Middle School attended by students from all of the following schools: 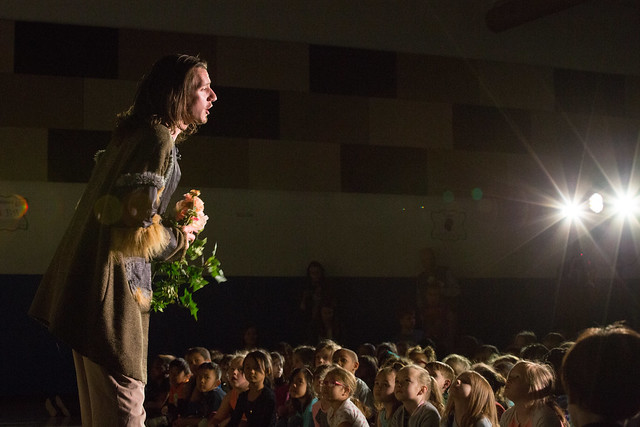