Where better than a gymnasium to stage the Google CS First Roadshow that pulled into Meredith Middle School Friday afternoon?

That’s CS as in computer science, and it offered plenty of (mental) exercise for the gym full of 6th graders and a congressman (Iowa Rep. David Young) who turned out for the interactive program that teaches students about the importance of STEM education and introduces them to computer software coding basics.

Check that. The Meredith 6th graders got their intro a few weeks ago in the Tech Design class that’s one of the “specials” rotation at the district’s International Baccalaureate (IB) middle schools (Meredith, Merrill, Goodrell and Brody).

Jason Lampe teaches the class at Meredith and he says the school places extra emphasis on technology curriculum as it preps students for the STEM Academy that awaits them next door at Hoover High.

“As an IB school, our curriculum includes the MYP (middle years programme) element of design. Students rotate through design classes in addition to their exposure to visual art and music, for instance. The STEM aspect is critical to 21st century learning.”

The goal of the presentation is to encourage students to develop an interest in computer science education and grow their problem-solving and technical skills. At Friday’s event, Google’s setup included laptops lined up in the gym like trays in the cafeteria at lunchtime. Students paired off to sail through a demonstration where each twosome had an empty boat afloat on placid waters. The assignment was to use their imaginations to stir them up.

“Kids are exposed to technology at such an early age, but don’t necessarily get to learn about why computer science should be an important part of their lives – both now and in the future,” said Laura Peterson, a Google spokesperson. “We want the next generation of students to be able to create technology, not just consume it.”

To make some waves, in other words.

The mental mariners seized their opportunity to do just that on Friday. 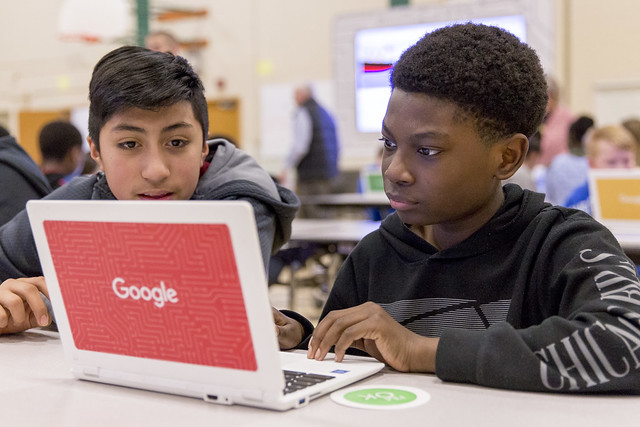