Teaching the Music of Language at Cattell Elementary School

Daft the adjective means silly or foolish, but Daft the noted arts educator with a client list that stretches from sea to shining sea? She’s serious.

That’s Marcia Daft, the developer of Teaching the Music of Language. She’s a mover and shaker in educational circles both figuratively and literally as a national workshop leader for the John F. Kennedy Center for the Performing Arts and a Master Artist with the Wolf Trap Institute for Early Learning Through the Arts. She was back in Des Moines this week for the second in a series of three workshops in connection with the DMPS Turnaround Arts effort in the Northside feeder schools. DMPS is partnering with Des Moines Performing Arts to bring Daft to the district.

She is a dynamo with a bachelor’s degree in biomedical engineering and a master’s in music. No one academic discipline could hold her, so she forged a trailblazing career out of teaching strategies tailored to children’s natural propensity to learn by getting up and doing.

On Friday, Cattell students will dress up like they are a hundred years old in celebration of the 100th day of the school year. But on Tuesday and Wednesday they were acting their real ages under Daft’s energetic direction. She even uses the word “Action!” after issuing instructions.

Since Daft was last here in November, Cattell 5th grade teacher Julie Zimmer’s class read Crossing Bok Chitto, an award-winning children’s book set in pre-Civil War Mississippi. The story includes a tribe of Choctaw Native Americans and enslaved African-Americans. It’s rich with imagery and history. That much was clear even to nonreaders of the book who sat in on Daft’s lesson in “word-painting.”

Students passed “sound balls” around the circle they stood in, modulating their voices. Loud, soft, fast, slow, high, low…all of the verbal brushstrokes were employed.

Excerpts from the book were used for some of the exercises. Zimmer’s class vividly reflects the ethnic and cultural diversity that is a DMPS hallmark, so when Daft had them all loudly and boldly quoting the passage, “We are bound for the promised land!” the aptness was unmistakable. Zimmer said that Teaching the Music of Language enables active participation among ELL students since the emphasis is as much on inflection and feeling as it is on actual words. “The kids get to express themselves in creative ways that they usually don’t in a reading context,” she said.

Every time one of the objectives listed on the whiteboard was achieved, Daft checked it off to a rousing chorus of “Cha-ching!” from the class. Okay, Daft gets a little daft now and then, but always with a purpose.

The last task on the to-do list was composition of a book report in the form of a “five senses remembering poem.” The rough draft was a group effort. The sound of slaves preaching, praying and singing in their secret church in the forest…the sour, juicy taste of blackberries…the feeling of a song touching a heart…the earthy smell wafting off of a river at nighttime. Those were some of the consensus elements each student’s personal poem was built upon.

Daft returns for the third and final workshop in the series in April. Her direct contact with students like Zimmer’s 5th graders is for demonstration purposes. She’s primarily here to teach the teachers. And they are impressed.

“She’s awesome!” Zimmer whispered while watching the lesson unfolding in her classroom. It’s tough to whisper with exclamation, but that’s what Zimmer did. If she’d heard it, Daft would have appreciated the compliment, yes, but more so its musical expression.

Photos from Teaching the Music of Language at Cattell 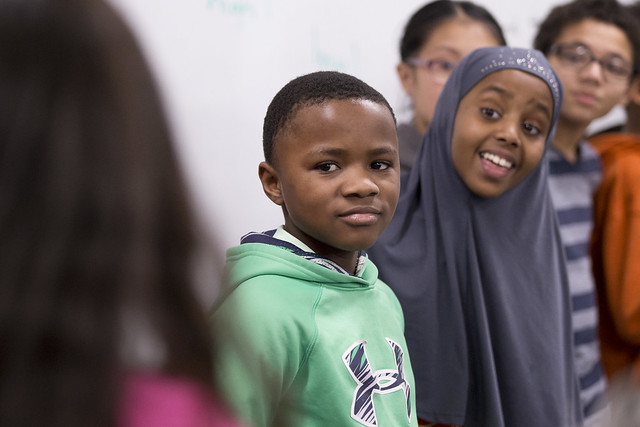