Letters of Intent: A Rite of Passage for Many Student-Athletes

Second semester, senior year, the longest winter of a teenager’s life. It’s the season when letters of acceptance go forth, when colleges and a fresh batch of frosh pledge themselves to one another. And for a select group of student-athletes, it’s the annual culmination of a flattering role reversal in the rite of college courtship. Typically, the onus for due diligence is on the student, researching prospective schools for the right fit before applying to a pool of finalists and proving themselves worthy of admission. But for a fortunate few every year, the schools do the wooing. If you’ll come play for us, they pledge, we’ll pay for your studies.

The ceremonies were appropriately divided between the gym, where the LOIs were formally signed, and the library, where a cake & punch reception followed. The baker’s dozen of honorees are student-athletes, after all.

It’s the first time Roosevelt has bundled all of their scholarship athletes into the same signing ceremony. Head football coach Erik Link came up with the idea as a way to serve a dual purpose.

“It’s a reward for our seniors who are going on to continue their athletic careers at the next level,” he said. “But it’s also a motivational example for the underclassmen to aspire to.”

Indeed, the event drew a good number of underclass teammates in addition to proud families. Each of the honorees was introduced by Roosevelt Activities Director Todd Gordon with some hoopla and given the chance to step up to the mic for some thank yous.

Some of them sported gear from their next school. Will Nigut, for instance, wore a cap emblazoned with a big K for Kirkwood Community College where he hopes to pitch as well as he has for Roosevelt. The K could also stand for strikeout as it does in baseball’s official scoring code.

Others included a shout-out to their next school in appreciation for the opportunity. “Go Tigers!” was how softball player Kate Claypool put it, as in DePauw University; Greencastle, Indiana.

There were also Bulldogs, Eagles and Cyclones to-be, among others, which led to a point of order from the master of the ceremonies.

“Good luck at the next level,” Gordon told the stars of the show, “but remember – Once a Rider, ALWAYS a Rider!”

Here’s the complete roster of those who signed their LOI on Wednesday: 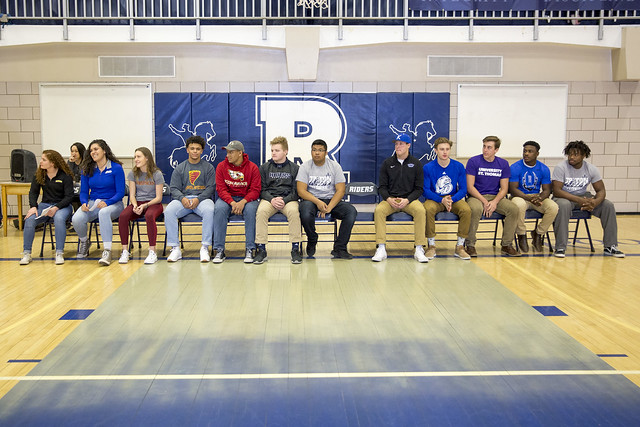