Try to imagine a household of eight ranging from infant to age 20. How would they manage? Impossible, right? Unless there was a heap of willingness to work hard coupled with a strong network of support.

Tuesday at Central Campus an improbable, almost insurmountable situation got a little bit more manageable when the keys to a car repaired by the school’s auto mechanics program were handed over to a young mother who is bent on finishing school.

Shellvonne Fuller has four children under the age of three. Her two teenaged brothers also live with her, the kids and the kids’ father because they have nowhere else to go. Their big sister stepped up to be their guardian.

Against long odds, she is trying. They are trying. And the school district that’s uniquely equipped to is trying to help them.

Next week Shellvonne starts classes at Scavo High School to finish work on her high school diploma. While she’s in class her kids will be safe and well-cared for in Scavo’s onsite daycare center. Scavo, the “full service community school,” also features medical and dental clinics, a food pantry and scheduling tailored to meet nontraditional students’ needs.

Think of Scavo as a track team and Shellvonne as a high hurdler.

Stacie Nessa is the district’s liaison with the Iowa Department of Human Services and she’s been helping Shellvonne craft a way to earn the district’s core diploma, a new offering that requires completion of all credits in fundamental academic disciplines but waives the electives that flesh out a traditional transcript.

“I am so impressed by Shellvonne,” said Nessa. “She inspires me when I feel like complaining about the problems I deal with. She has so much on her shoulders but she is determined to make a better life for herself and her family.”

Jamie (Nessa’s sister) and Eric Eilers donated a 1999 Chevy Tahoe that’s logged more than 170k miles to Shellvonne’s cause. It needed some work. Nessa collected about $1,100 from some other private donors to cover the necessary repairs, mainly to the brake system. New tires and a radiator were also installed.

“They work well together and are great problem solvers,” Nelson said. All three were on hand to meet Shellvonne when she came to pick up the vehicle that will enable her to get to and from a school that’s perfect for her. And to think it’s just a few floors above the newly renovated basement level at Central Campus where the auto program is housed.

Randi Oleson is the Principal & Special Education Supervisor of Districtwide Programs. She deals with nontraditional students and circumstances on a daily basis, lots of them. But she’s never seen a jigsaw puzzle quite like this one that cuts across so many district program boundaries.

“There are so many layers to this and that’s what makes it so special,” she said. “The kids here who worked on the car, they’re so excited about helping someone out.”

Call it a new variation of extra credit.

“I cannot wait to walk across that stage and get my diploma and look out and see my kids and my brothers. I want to be able to take better care of them and set an example for them,” said Shellvonne.

Shellvonne’s brothers are both enrolled in the Alternative Center, also located at Central Campus. Starting next week, seven of the eight members of the household will be at school – together. Two key words there, one after another: school and together.

“Today is just one example of the dedication and commitment of DMPS to our students,” said Oleson. “Shellvone was already reported to the state as a non-graduate. It would have been easy to end the story there, but people here understand that by supporting her we are making a difference in the lives of seven current and future students and the future of this family.

“This project involved a number of staff who took the time and effort to think outside the box. When it became evident that transportation was the primary barrier to getting Shellvonne back in school, through conversation and reaching out a vehicle was located that was simply sitting and rotting in a driveway.”

A wellspring of community goodwill was tapped that allowed all of the district pieces to fall into place.

While the car was at Central getting the necessary work done, Shellvonne worked on getting her driver’s license. She did it. All that remained was to pick up the keys, transfer the title and away she went – on her way to a myriad of possibilities that used to be in the category of “You can’t get there from here.”

Now, a way has been cleared. 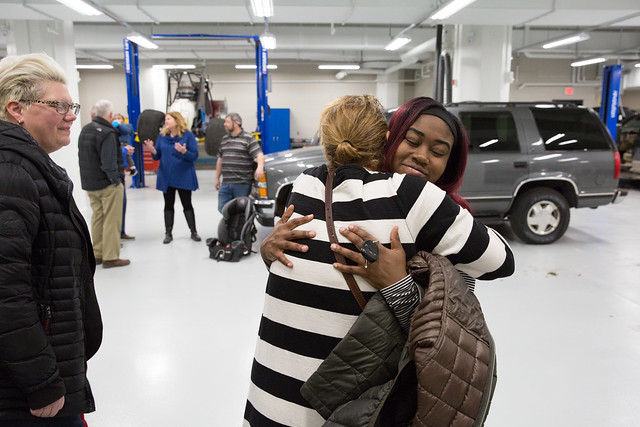