The Iowa Senate is considering a bill (SF2359) to end voluntary diversity plans for school districts. The move could dramatically impact the quality of education in Des Moines, and should be on every parent’s radar.

The end of diversity plans begins the re-segregation of our schools, said one senator at this week’s Moral Mondays conversation at the Iowa State Capitol. The meeting drew a standing-room only crowd.

The Moral Mondays events are organized by the Interfaith Alliance to “highlight the moral progress at work in the Iowa legislature by discussing legislation that spans a range of progressive issues working for the advancement of Iowa values like equality, fairness, and justice.”

DMPS and other urban districts in Iowa have adopted voluntary diversity plans* based on socioeconomic status, with some cities also considering student academic achievement and English Language Learner status.  The plans are designed to prevent large pockets of poverty from forming in urban cities as middle-class families seek to open enroll their students in neighboring districts.  Besides the potential budgetary implications for the urban districts, removing the plans would have a negative impact on the quality of education for all students. The higher the concentration of students in poverty, the more challenging it is for students to learn.

Senator Herman Quirmbach, (D) Ames, is on the Education Subcommittee and was the only senator to vote against the bill. Quirmbach said data from other urban communities weighed heavily on his decision. Cities without a diversity plan show a slow re-segregation of schools.

“I’m not denigrating anyone’s intention, but well-to-do white families are leaving…” Sen. Quirmbach said, pointing to what he and others called a “baseless fear” of diversity. It was noted during the meeting that a large number of open enrollment applications were coming from parents of incoming kindergartners, who may be succumbing to “a need for the familiar.”

DMPS superintendent Dr. Thomas Ahart noted the growth of the city of Des Moines is largely low income, and the city has become a landing point for refugees and immigrants from around the world. While he acknowledged the challenge of the heavy concentration of poverty in Des Moines, he pointed to the advantage of diversity for all DMPS students.

“There’s a huge advantage for our native-born students attending school every day with truly an international population,” Dr. Ahart said. “They’re better prepared for college, better prepared for the workforce, they have a much better understanding of how our world works — what our world looks like, what our world feels like — and are more adept at adjusting to demographic changes as they progress through their academic and professional careers.”

Still, some lawmakers are calling for an end to the diversity plans, citing a need for an increase in “parent choice.” Margaret Buckton of the Urban Education Network of Iowa noted that low income families could leave under the diversity plan, and yet they are staying. She also pointed to the large variety of educational choices within Des Moines Public Schools, including International Baccalaureate World Schools, Montessori schools, Advanced Placement classes, Central Academy and Central Campus.

“There is parent choice now,” Buckton said. “(By ending diversity plans) there is risk of lack of quality of education for the students remaining. The unintended consequences of that outweighs the need for additional parent choices.”

“Good public policy for public education should be focused on the greater good for all of our children,” said a release from the Moral Mondays Iowa project.

*Five Iowa school districts have voluntary diversity plans: Davenport; Des Moines; Postville; Waterloo; West Liberty. These plans use low socioeconomic status (SES), and some use the additional factors of student academic performance (SAP) and/or English Language Learner (ELL) status as a basis to develop their composite ratios, and regulate open enrollments in and out of the district. Most of the districts also require that open enrollments not cause a population to exceed a district’s total category ratio by more than a certain percentage. DMPS uses the same plan to regulate within-district transfers which may also be the practice of the other larger districts. 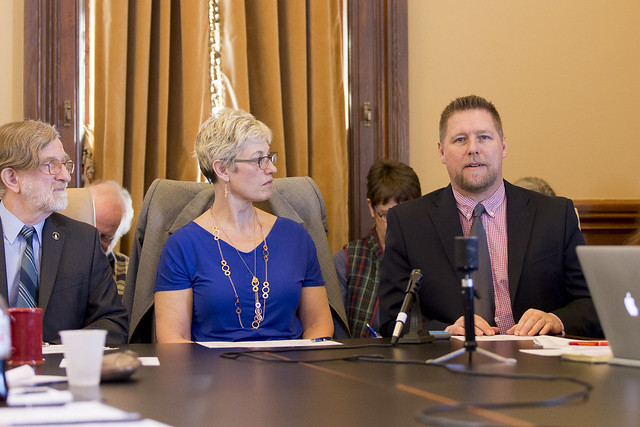