The Iowa Supreme Court is taking its case(s) to the people.

Occasionally the court hits the road in a deliberate effort to raise Iowans’ consciousness of how their state’s judicial system goes about its work.

Tuesday night the supreme septet heard oral arguments in the case of State of Iowa v. Bion Blake Ingram in the auditorium at Hoover High School.

The formal session capped off a day that began with Chief Justice Mark Cady speaking to students during their first class block in the morning before the auditorium’s temporary conversion into a courtroom.

Cady was appointed to the high court in 1998 and named Chief Justice by his fellow justices in 2011. That year marked the beginning of the tour that stopped yesterday at Hoover.

In 1839, before Iowa had even achieved statehood, the territory’s court ruled that a slave who had fled Missouri was a free man here in the first case to come before it.

“We got off to a good start,” Cady said.

Several other landmark rulings in the latter half of the 19th century established a pattern of Iowa’s courts running well ahead of the rest of the country:

Clark v. The Board of Directors

An 1868 ruling that racially segregated “separate but equal” schools were anything but, 86 years before the U.S. Supreme Court reached the same decision.

In 1869, Iowa became the first state in the union to allow women to practice law by affirming Mansfield’s right to work as an attorney.

In 1873 the court ruled against racial discrimination in public accommodations, 91 years before the SCOTUS did so.

Cady also cited the case of Tinker v. Des Moines Board of Education, one that arose from DMPS students wearing armbands to school in 1965 to protest the war in Viet Nam. Their expulsions were appealed, and ultimately the SCOTUS ruled in the students’ favor in 1969, establishing the principle that “students do not shed their constitutional rights (freedom of speech in that instance) at the schoolhouse door.”

“That case was winding its way through the court system when your school first opened,” Cady pointed out in reference to Hoover’s celebration of the school’s 50th anniversary.

But the main point Cady sough to make was that justice is not solely up to the courts to dispense.

If there is ever to truly be the “justice for all” aspired to in the Pledge of Allegiance, it is up to all of us.

“We have to do justice to each other,” he said. “It’s not just for courts to decide by resolving disputes. The preamble to our Constitution calls us to build a ‘more perfect union.’ That is a challenge to change.”

Cady’s civic house call was not only apropos of a school lining up special events throughout its golden anniversary year, it also made sense as a measure of assimilation for a student population comprised of more than 40 nationalities.

Judicial proceedings aren’t exactly a spectator sport. They tend not to go the way they’re portrayed in Hollywood courtroom dramas, especially at the appellate level. Nevertheless, there was a good turnout last night for the oral arguments about a criminal case of drug possession. The question concerned 4th amendment protections against unreasonable search and seizure.

Lawyers for the appellant and the appellee took turns facing the seven inquisitors under strict time limits, like rounds in a boxing match. They never knew which direction the next inquiry was coming from and had to think on their feet, parrying the probes of the justices. The gears of justice are thought to grind methodically, but the pace of the proceedings was lively and the spectating was maybe better than expected.

The session was over in about an hour. Chief Justice Cady thanked everyone for coming and court was adjourned to a reception in the student center.

Pending the court’s decision in Iowa v. Ingram, the 8th grade government classes at Central Academy assigned to be there ruled unanimously that the cookies were a highlight of the evening’s “homework.” 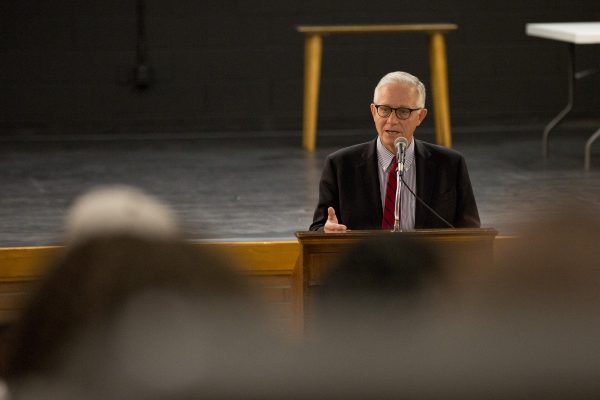