As different as middle school and high school girls are, they seemed unified today in their appreciation of Reshma Saujani, founder of Girls Who Code, a national nonprofit organization working to close the gender gap in the technology and engineering sectors.

The Central Academy students are members of Iowa’s first chapter of Girls Who Code.

About two dozen GWC students laughed and nodded as Saujani talked about a culture that celebrates in cinema girls who change their letter grades from As to Ds in order to fit in, and wear t-shirts that say, “I’m allergic to algebra.”

These girls and their classmates at Central Academy, home of one of the top Advanced Placement programs in the country, are changing that stereotype, whether they know it or not.  As of today, 56% of students enrolled at Central Academy are female students and more than half of DMPS students identified as Gifted and Talented are girls.

Saujani listened as the students talked about their love of math and science, and then posed a question that left brief looks of uncertainty on their faces.

“How many of you are choosing a career because it will make you a lot of money?” she asked.

About two-thirds of the room cautiously raised their hands.

“Every hand in this room should be up,” Saujani told them. “Girls are taught to pursue soft careers. You have a right to dream of a billion dollar exit. And while you make a billion dollars, if you change the world for the better, good for you!”

The GWC club was started in September of last year and is currently open only to GT students. However, plans are under discussion to admit any female student who wants a future in technology and engineering. 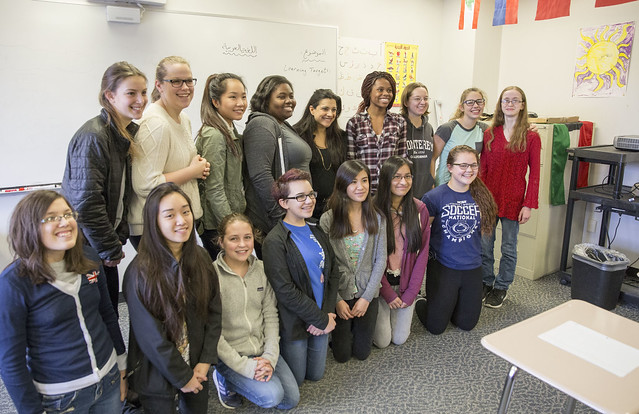