Board Approves Drug Used to Save Lives in Overdose Situations 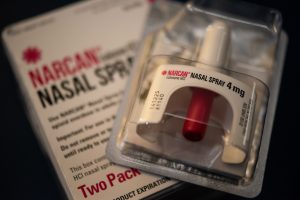 Naloxone, commonly knowns as NARCAN, can be administered as a nasal spray when a patient is suspected to be overdosing on opioids like Fentanyl.

Update: The drug Narcan arrived at DMPS on Monday, October 31, and was distributed to all schools for use when an opioid overdose is suspected.

Nurse Maragaret Matijevich remembers the day she could have lost a student to a drug overdose.

“The student admitted to ‘taking something’ during lunch,” she said. “As I was assessing him, he lost consciousness.”

While the student did not die, Matijevich said having Naloxone on hand would have allowed her to begin treating him immediately, rather than waiting on emergency responders to get to the building.

DMPS nurses report they could have used Naloxone 11 times during the 2021-22 school year. Young people increasingly are affected by Fentanyl, a powerful opioid. Counterfeit prescription pills containing Fentanyl are widely available and young people believe the “prescription” won’t harm them. In 2021, 87 percent of overdoses in Iowa were due to Fentanyl.

That’s why Abbott petitioned the DMPS Board of Directors to create a policy around schools keeping and using a supply of Naloxone, commonly known as NARCAN. It is an opioid antagonist that is administered as a nasal spray and acts on opiate receptors in the brain, immediately countering the effects of an overdose. If any student, employee, family member, or visitor in the school appears to have overdosed on opioids, the medication would be administered by the nurse or another trained staff member. If given to someone who was not experiencing an actual opioid overdose, the drug will not harm the patient.

The Board approved the policy during their meeting on Tuesday evening. The adoption of the policy qualifies Abbott to access two prescriptions for each DMPS building through the Iowa Department of Health and Human Services, which provides the drug at no cost to schools.

Medical professionals say keeping a supply of Naloxone is similar to stocking an EpiPen for extreme allergic reactions, or an AED for heart failure. They are meant to be temporary measures. When there is a medical emergency, schools will still call 911 for an ambulance.

“Narcan alone doesn’t override our current practices with EMS protocols,” said Abbott. “But it is an intervention that can be done immediately before EMS arrives to better patient outcomes and lessen the chance for an adverse event.”

Abbott says schools are scheduled to be stocked with Narcan by Thanksgiving Break. 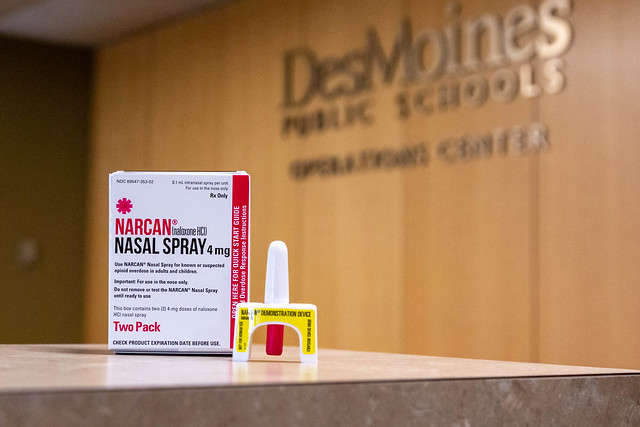