The bridled burrfish, a native to the Caribbean, peers at visitors to the Central Campus marine biology laboratory.

Like a curious neighbor eyeing new construction next door, the bridled burrfish (Chilomycterus antennatus) occasionally pauses in its modest Central Campus tank to eyeball the installation of what must seem to this little porcupine fish like an aquatic mansion.

Students cut the ribbon on the tallest marine exhibit ever assembled at DMPS on Friday.

The 1,000 gallon new-to-Central Campus exhibit tank came from the Newport Aquarium in Kentucky. Dr. Barord and aquarium science instructor Kirk Embree were networking at the Regional Aquatics Workshop when aquarium staff offered to donate the tank to the district. A donation estimated to be worth up to $10,000.

“Heck, yeah!” Dr. Barord remembers thinking at the time of the offer. “When it arrived in August (2019), I was excited and overwhelmed to see how big it was in person.”

He had no idea it would take nearly a year and a half, due to a big interruption beyond his control, to install it.

The work started right away, because Dr. Barord and his fellow teachers, his marine biology students, custodial and facilities staff first had to take down an entire system of smaller aquariums. They carefully moved fish to new homes and busily drained and cleaned the tanks, moving them into storage.

“I remember lying on the ground undoing bolts from the lab tables,” said Virtual Campus senior Sophie Van Gundy, who was among the students who helping move items to storage and take debris to the dumpster.

Then, work stopped abruptly as the COVID-19 pandemic spread quickly in the U.S., closing schools. When students returned to the lab for the 2020-21 school year, their goal was to have the tank installed by the spring.

“I wanted to challenge my students to attempt the impossible – it was probably fifty-fifty on whether it would happen. But we would sure not be giving up on it.” Dr. Barord said.

In the category of “some assembly required,” the tank had a high level of difficulty. DMPS plumbers went to work, putting in a pump, protein skimmer, chilling unit, and air bubbler system.

Students added the first rocks to the tank and cracked open some soda pop (you read that right). In the Coke vs. Pepsi purely scientific debate, Coca Cola won out and was poured into the tank to help grow the correct number of bacteria to keep the fish healthy.

Then, in went the primary exhibition items. Artificial corals and a large, floating mooring buoy on a chain attached to a rock on the aquarium floor.

“I want to show students how a mooring buoy gives boaters a place to tie off their vessels instead of throwing an anchor down and damaging coral reefs,” Dr. Barord explained.

Start to finish – building the large exhibit was no small task.

“There was a lot of manual labor,” said Van Gundy.

Worth it? Heck, yeah.

“​It is a great eye catcher for when you first walk into the Marine Biology program,” said Van Gundy. “We can put a really diverse selection of organisms in a tank this size.”

Van Gundy, resident of landlocked Iowa, is headed to Eckerd College in Florida in the fall to pursue more marine science studies, a passion she might not have imagined if not for the marine biology program at Central Campus.

“This lab is an amazing place to not only learn and work together, but to contribute to an amazing ecosystem (both academically and literally), and feel like you can make meaningful change,” said Van Gundy. “This new tank might be giant, but projects of all sizes are approached with the same passion and thoughtfulness, which is what makes the program so special and effective.”

Dr. Barord said the 1000-gallon tank embodies the confidence and commitment that so many friends, colleagues, and business partners have in the CC program and more importantly, in the students that come through the doors each year.

“As excited as I am about today, I am more excited about tomorrow and the new ideas that future students will be able to share, discuss, and implement here in the Marine Biology program.” 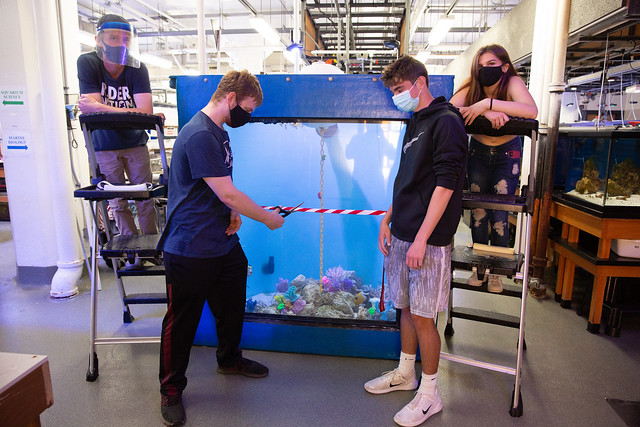 About the Marine Biology program at Central Campus: The Marine Biology program puts students face to face with hundreds of marine organisms found around the world. Students won’t just learn about the ocean from books, they also take care of over 100 “tiny oceans” during the year and personally interact with sharks, jellyfish, corals, nautiluses, and hundreds of fish in a new facility modeled after university laboratories and public aquariums. Students are also given the opportunity to conduct their own research projects, participate in science fairs, practice field work by kayaking, dissect different organisms, and more. What makes this program so unique is that it is a student-run laboratory and aquarium which gives each student the opportunity to literally get their hands wet in everything that goes on, but to also leave a legacy for other students by coming up with new ideas for aquariums and different marine organisms to have in the program.