A Special “Welcome Home” at The Downtown School

It was a welcome home ceremony planned out with the precision of a fine-tuned military operation. Which, in a way, was only appropriate.

Sergeant Stephen Waltz is an infantryman in the Iowa Army National Guard assigned to the 1-113th Cavalry. His unit has been deployed to the horn of Africa in support of Operation Enduring Freedom.

At noon on Tuesday his flight home arrived back in Des Moines. From that moment, with clockwork precision, the mission was on to surprise his two children – Zadok and Oakley – both students at The Downtown School.

Sgt. Waltz’s wife, Emily, and principal Rob Burnett were in cahoots to keep things under wraps from Zadok and Oakley. It involved some well-intentioned deception.

As Mom and Dad slipped in one entrance to the school, Zadok and Oakley were asked to come to the front of the school for a photo op about brothers and sisters. After a few clicks of the camera, principal Burnett asked them to tie a yellow ribbon around a nearby tree (ala the 1970s hit song by Tony Orlando and Dawn). As the knots were being made, Sgt. Waltz snuck up from behind for a surprise greeting and some overdue hugs.

The Downtown School was the ideal spot for this family reunion. Emily’s father Jeff Kerns is a teacher at the school who took a break from class to join in welcoming his son-in-law home.

Standing in front of the school Sgt. Waltz commented: “Iowa has never looked so beautiful.” While the deep blue sky and puffy white clouds added to the scene, the sentiment was about family and not the weather.

When the hugs ended for the moment, principal Burnett gave Zadok and Oakley an early dismissal. Time for them to spend an afternoon with Mom and Dad.

Photos of a Special “Welcome Home” at The Downtown School 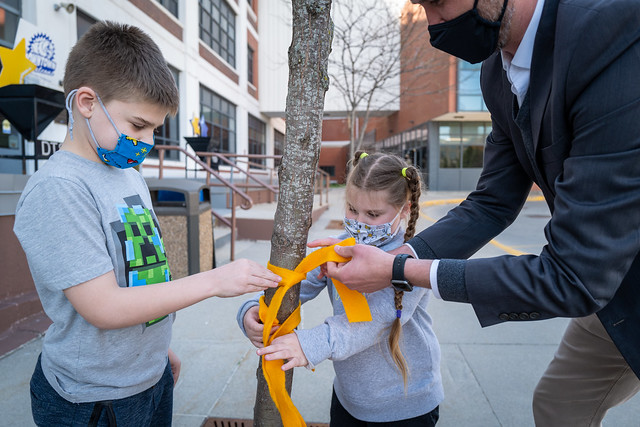