As a young man, Benjamin Franklin suggested the following for his epitaph: “The body of B. Franklin, Printer (Like the Cover of an Old Book Its Contents torn Out And Stript of its Lettering and Gilding) Lies Here, Food for Worms.”

Even after his resume expanded to include inventor, scientist, Founding Father and architect of both the Declaration of Independence and the United States Constitution, Franklin never revised that parting shot that was equal parts pride and humility because he never considered any of his other distinctions to be grander than his achievements in the art of printing. In that field, he was regarded as the best in colonial America.

Which brings us to Forrest McGuire, the DMPS Printing Services Supervisor.

Like all district departments, the print shop took a brief timeout when the closure of schools first went into effect and reinvented itself.

“We spent the first few days catching up on things that normally get put off like straightening up and cleaning the shop and projects that had no specific deadlines,” McGuire said. “It was very quiet without our equipment running…and a little unnerving since our department is funded by the work we do for all the other departments and not by a normal general fund budget. When we are not printing we are not paying our expenses.”

Gradually, a new normal developed and the beehive vibe resumed at the print shop. Their large workspace, located at the school district’s facility on Prospect Road, meant the new norm of physical distancing was easy to observe while still producing thousands upon thousands of documents.

“We all can probably name something that we took for granted,” McGuire said. “US Mail was one of those things that still kept coming, but the buildings weren’t open to receive it so we began receiving all the mail that normally went to the buildings directly. (Besides printer, Ben Franklin was also the first postmaster general of the US.) By week 4, plans were made to have us start printing activity books for pre-kindergarten to eighth grade that would be distributed weekly at the meal sites. We sent out 15,500 packets the first day and then were asked to make more because they ran out. We are now running two shifts to fill the orders for 29,000 workbooks that will be distributed at the elementary schools and middle schools…and 5,000 student device guides to be handed out when grade 9-11 students pick up their computers.”

Free public education may not be written into the US Constitution, but it’s become as much a cornerstone of American liberty as anything in the Bill of Rights. Under current circumstances, McGuire and his staff are essentially running a vital variation of freedom of the press, something else that may have fallen into that category of things taken for granted that McGuire mentioned.

“I’ve reminded my team that all of us are part of the operations team whose purpose is to assist the district in fulfilling our essential mission of educating children,” McGuire said. “Printing Services, with our six full-time staff and three casual laborers, now prints around 25 million copies a year, providing instruction materials for the students, manuals for teachers, promotional materials, posters and banners for the buildings, along with processing the district’s outgoing mail.”

The ambitious distance learning initiative that DMPS launched this week to salvage what remains of the 2019-20 school year is necessarily tech-heavy. But it clearly couldn’t happen without a good old-fashioned printing press paving the way.

So start the presses, McGuire & Co., and keep them humming.

Franklin would be as proud of your work as he was of his own. 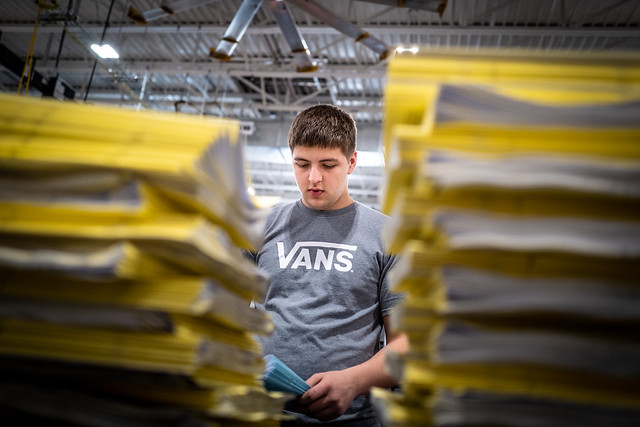