Mostly, it’s business as usual around the district during the last week of classes before Winter Break, but there is room to squeeze in some signs of the season. We’re making the rounds to sample some DMPS holiday traditions.

On Tuesday at Central Campus, a band made up of faculty members entertained students during the lunch blocks. Staff Infection has been getting to school early for the past couple of weeks to brush up on a seven-song set of holiday standards. The group’s sixth annual winter “tour” will continue, and end, on Thursday when they set up down the hall from today’s location in the student commons.

Clint Gadbury’s regular job is teaching civil engineering and architecture but this year he brought his trombone out of mothballs to sit in with SI.

“I haven’t played this thing in 23 years,” he confided before blowing his horn on Let it Snow. The pressure really ratcheted up when his son Cale and his kindergarten/1st grade classmates from next door at the Downtown School showed up to listen in.

Another newcomer to the group this year is Central Campus SRO Marco Finley. The only known cure for Staff Infection is said to be more cowbell, so that’s what Officer Finley provided, along with a touch of tambourine.

Photos of Students, Staff Celebrating the Season at DMPS 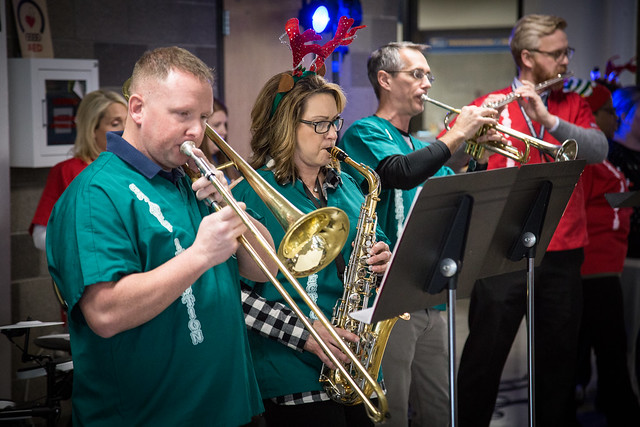