Breakfast in one classroom at Perkins Elementary Tuesday morning was a combination birthday party and memorial service.

Aurelliuz Jones was a 4th grade student at Perkins where he’d attended since kindergarten. He died suddenly and unexpectedly on September 25th after an asthma attack. Today, December 17th, is his tenth birthday.

What do you say about a radiant little boy whose name runs the gamut of the alphabet in the space of just nine letters; whose life lasted just nine years?

“He had the biggest smile I’ve ever seen,” said school nurse Melissa Keller, whose birthday also happens to be today. “Aurielluz and I were birthday buddies. It was a heartbreaking loss for our school.”

Keller and Katie Dall-Winther, Aurelliuz’s teacher, invited his mom and sisters (Viktoria graduated last spring from Lincoln High and Alayanna is a sophomore there) to come and share memories Tuesday morning in a spirit of celebration. Younger brother Mykal came up from his 2nd grade classroom and joined in, too.

The traditional Happy Birthday serenade didn’t fit the circumstances as well as an original song written in honor of Aurelliuz by Perkins 1st graders. Debuted at last week’s K-2 winter choral concert, the song was encored by the class that wrote it with the help of music teacher Jessica Dietz. The chorus goes like this:

We will miss you, Aurelliuz
You made a big difference for us
We hope this song helps heal the sadness
And spreads the world full of your gladness

Lakenya Stinson is Aurielluz’s mom and the outpouring touched her.

“This is a wonderful way to honor his memory,” she said. “Everyone at Perkins has been so good to us. They are keeping Aurielluz alive.”

Keller said grief counseling was available to Perkins students in the immediate aftermath of the tragedy but much of the healing has happened organically and gradually. Lessons not found in an elementary curriculum have been absorbed on the fly, taught in many ways by Aurielluz’s friends and classmates.

Noah Tarnowski started kindergarten with Aurielluz and they were in the same class again this year.

“What I miss most about him are his calmness and his love,” Noah said. “I remember a game we used to play together on the playground,” about an imaginary golden bell.

Aurielluz looked forward to playing the trumpet next year in the 5th grade band. Dietz arranged for the donation of one after his death and it was presented to his mother as a posthumous birthday present. Dall-Winther gave the family an album of memories that included some of Aurielluz’s own work as well as remembrances of him created by students. Plans have also been made for a buddy bench and a tree to be added to the Perkins playground in memory of Aurielluz.

His mother and sisters reciprocated for all of the memorials by upholding the elementary school tradition of bringing treats for the birthday boy’s classmates.

Posted on the walls of Dall-Winther’s classroom are math charts, more typical stuff that 4th graders grapple with. Tuesday they could be seen as principles in the story problem everyone in the room was solving together. 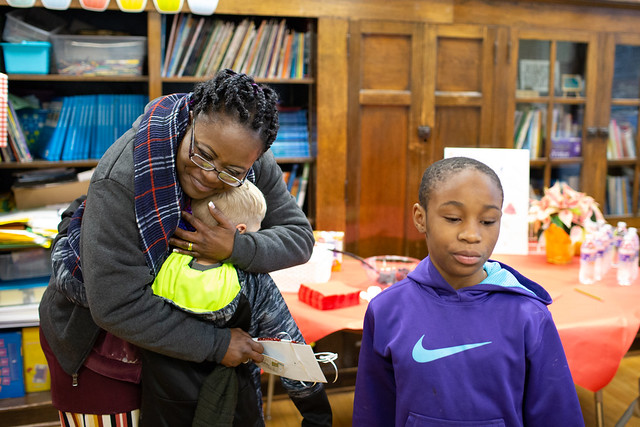