Jennifer Keuning teaches and coaches at Brody Middle School. As of last week, she also referees a new brand of basketball games.

Unified sports are the next wave of the Inclusion Revolution that’s underway at DMPS in partnership with the Special Olympics and the program’s inaugural middle school basketball season launched a week ago. Unified teams are made up of both genders and students with and without intellectual disabilities. Kids who aren’t likely to be classmates become teammates – and friends.

“I must say it was one of the most fantastic opportunities I have had as a teacher and coach while employed with DMPS,” Keuning said after reffing Brody’s home game against Merrill last week which, kind of fittingly, ended in a tie. “This opportunity has brought great joy to my life and that of the students, parents, and families we serve.”

Yesterday we were at Brody when the Cardinals hosted Goodrell. The unified games are played with a 10-minute running clock before the regular games so all the trappings are there. Cheerleaders, scoreboards, a cheering crowd.

To complete their lineup, Goodrell borrowed one of Brody’s players, 6th grader Alex Cochrane, #5, who netted what proved to be the winning basket in an 8-6 contest. But when his shot went through it wasn’t as though he’d helped a rival school defeat his own. It was purely a personal triumph, a joy, for Alex.

“This is all about creating opportunities for kids who otherwise wouldn’t have them,” said Chris Roberts, who directs Student Engagement at Brody. His pregame PA speech to the fans included an exhortation to cheer loudly because, “training and playing together is a quick path to friendship and understanding.”

Even the refs understand the rules of these games are minimal. Traveling? No such thing. Fouls are few and if a player needs directions occasionally during the flow of the action, why shouldn’t a referee do a little traffic control as well? Keuning and her fellow zebras quickly discovered it’s impossible to blow a whistle while you’re smiling.

High school unified basketball action starts after winter break. Those games are scheduled during halftime of the girls’ varsity games. When springtime comes so will unified track teams.

“Eventually all of our sports will be unified,” said Roberts.

Forget victory and defeat. That day will be the ultimate win-win. 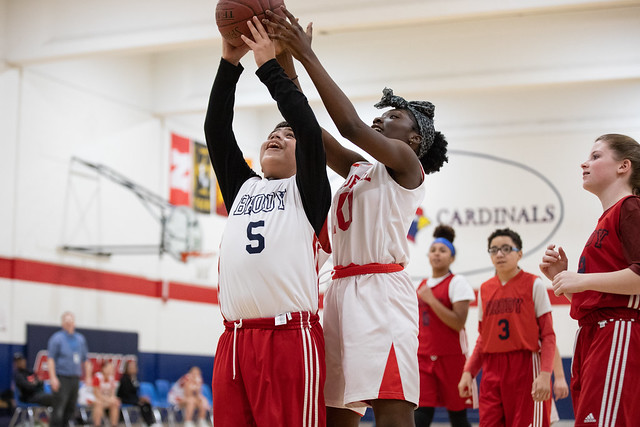