The House That Ben (and Central Campus Company) Built

Ben Molloy’s spent the last 35 years building something special as a teacher in DMPS building trades programs at Central Campus. At its last meeting on October 15, the Des Moines School Board gave formal approval to the sale of Mr. Molloy’s opus.

Rome wasn’t built in a day, and neither was this home. A house that began five years ago was finally finished last spring, put on the market in mid-August and recently sold – for $225,000. Proceeds will flow back into the CC homebuilding program. Molloy and his students used to refurbish dilapidated homes condemned by the city, but this one rose from scratch.

“When we started I thought it would take two, maybe three years to complete,” Molloy said. “I had to get creative and be on the lookout for ways to control costs.”

He estimates his scavenging, salvaging and repurposing amounted to $35,000 worth of materials incorporated in the house.

Cabinetry from the long defunct West High by way of Central Campus’s predecessor, Tech High, Molloy’s high school alma mater. Countertops and faucets from chemistry labs there. Hardwood flooring, bannisters and trim crafted from the bleachers in Tech’s old natatorium. Leftover insulation and flooring from DMPS renovation projects. Anything Molloy could get his hands on.

It’s a nice place they got out there near Easter Lake, in the River Woods Elementary School zone, and Molloy says that most of the sweat equity in the project goes to his students.

AJ Larsen is a junior at North who’s in his second year of Molloy’s program, and he’s found a home for his future.

“I guess it all started with Legos when I was little,” he said. “I like to make things; build things with my hands. Like this house, I worked on the flooring, and now look at it. It will be here for a long time and I can come by and say I helped build that. This is what I want to do.”

Larsen said Molloy was a good boss on the construction site.

“It’s his passion. You can tell he loves building and teaching us how it’s done.”

He wears a lot of hats, this Ben of all trades, even driving the school bus that delivers students to and from field trips and the building site where students are now in the process of fixing a drainage problem with the lot the house stands on, a finishing touch that was a condition of the sale.

“The Des Moines Public Schools and Central Campus outdid themselves with this one!” the Zillow listing goes on to say. To which now the School Board has officially added the one word that Molloy and five years’ worth of his apprentices have been waiting to hear:

Photos of the Central Campus-Built House 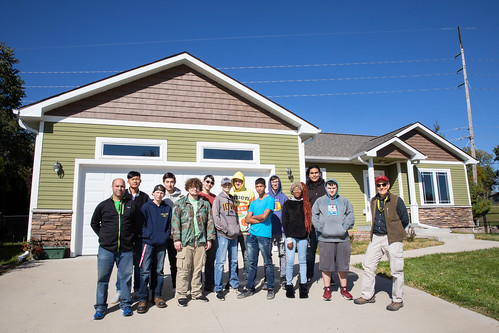