Friday morning would have been a good time for a pep rally in the auditorium at Roosevelt High School. The undefeated football team would take on Ankeny that night in a game with potential playoff implications. But the auditorium wasn’t available. It was being readied for an event with even bigger implications, Sunday’s Youth Voice presidential forum, co-sponsored by DMPS and the Des Moines Register. Six candidates for the Democratic nomination for president in 2020 accepted the invitation to come and woo an audience of young voters.

“Last December we were approached by (DMPS) Superintendent Tom Ahart and Fez Zafar (who has since become the student body president at Roosevelt) about staging an event like this,” said the Register’s Executive Editor, Carol Hunter, during her opening remarks at the event. “We get a lot of preliminary inquiries like that. Most organizations we never hear from again, but that wasn’t the case with Fez. He was persistent.”

Zafar not only moderated the event yesterday, he also mustered an army of student volunteers to make sure the event ran smoothly, which it did.

“I just put out a call through our student council,” said Fez early Sunday morning during final preparations. “Everyone was eager to help out.”

The forum was coordinated for students by students, but they hardly did it alone.

“I want to thank Des Moines Public Schools and the Des Moines Register for amplifying our voices,” said Zafar in both his opening and closing remarks.

On Friday, while sound technicians ran cables and positioned speakers, the district’s operations team temporarily removed auditorium seats to accommodate a media riser platform. Graphics and video specialists placed signage and camera equipment. The school library became an ad hoc green room for candidates and campaign staffers, and the counseling office was converted into a makeshift media corral where candidates could meet the press after taking their turns onstage.

“I’ve been involved with more than a few events like this over the years, and I think every aspect of the event that DMPS was responsible for went flawlessly,” said DMPS Communications Director Phil Roeder. “If there were ‘losers’ yesterday, it was any candidate who was in Iowa but didn’t take 30 minutes to stop by.”

The following six did:

“Because of Iowa’s first-in-the-nation presidential caucuses, our students have a unique opportunity for front row seats at American democracy,” said Dr. Ahart, while welcoming everyone to an event the Register livestreamed to an audience beyond the several hundred in attendance at Roosevelt. “And this event is a chance for them to model the kind of civil and civic engagement in our political process that everyone should display.”

Students and teachers posed the questions and they came from high schools across the district and Central Iowa. College students too were involved, from as far away as Washington DC. Topics were also wide-ranging, but there was one question that Zafar put to each candidate: 57% of the students who registered online to attend indicated they will be old enough to vote in 2020, but only 44% of them said they probably would. What would each candidate say to those who will have the right but might not exercise it?

Good question. In little more than a year, we’ll see if anyone had an equally good answer. Maybe sooner, actually. As Hunter reminded the students at the outset, any of them who will be 18 in time to vote by Election Day next year (November 3, 2020) may also participate in the Iowa caucuses next February.

One who surely will is Zafar, who turned 18 three days before the party he threw. Hmm, let’s see, that means he’ll be old enough to run in 2036. If any Fez for Prez signs are leftover from his student council campaign last spring, maybe he should hang onto them.

NOTE: Watch the entire forum in the video posted in the upper right-hand corner of this page. 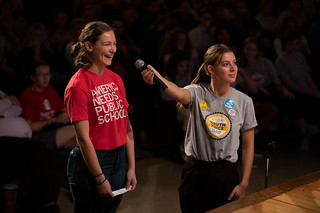