Even a beehive like Central Campus downshifts during the summertime, but even so, something noteworthy happened there Monday morning that’s never happened before.

Launched in 2017, the Ruan Information Technology Apprenticeship Program enables select students to gain valuable work experience, earn an income, and continue their education simultaneously. Apprentices work alongside professionals in Ruan’s IT department for a minimum of 2,000 hours while earning high school and college credit, real-world experience AND a paycheck!

At an intimate graduation ceremony in the multipurpose room at Central, Ruan CEO Ben McLean announced that Diego, who will continue his education at DMACC in the fall, has also accepted a full-time position with the company.

Louis has been accepted into Drake University’s 3+3 program, which will culminate with a law degree in six years, at which time McLean said the Ruan legal department will be waiting for him.

“We can do more of this,” said McLean during his remarks, a point echoed by Iowa Governor Kim Reynolds who was also there, not only to congratulate Diego and Louis, but also to thank Ruan and DMPS.

“This is the kind of innovative thinking that it takes to educate and train Iowa students to fill the jobs that are waiting for them in skilled, high-paying STEM fields in this state,” said Gov. Reynolds. “So thanks to Des Moines Public Schools for being the first district to pave the way for others. There are about 10 more now and another 50 or 60 just waiting to get into these kind of partnerships with Iowa employers.”

Louis was eager to speak, too, when the governor asked if he was willing.

“When I went to Drake for my admissions interview I noticed a photo of the Des Moines skyline on the wall,” he said. “When I was asked why I wanted to come to Drake and what I hoped to accomplish there, I pointed to it and said, ‘There is the Ruan Building where I have worked as an apprentice while I finished high school at Central Campus, a great place to learn. It was an incredible experience and I want to bring everything I learned there, about technology and about people, here to Drake and continue to learn…’ She was breathless, and she said, ‘Wow, so this is Louis…’”

Pretty much the same reaction he got Monday in the retelling. 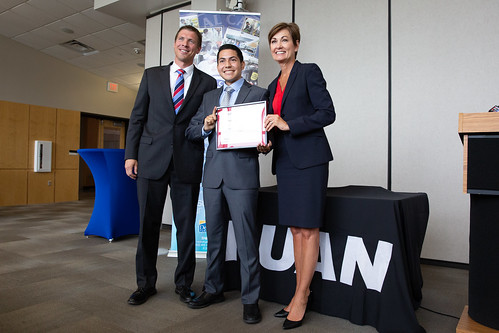