Kevin Truong made a lasting mark as a DMPS student.

He was a champion Central Academy mathlete and part of the first batch of ISU4U scholarship awardees, 13 trailblazing Moulton Elementary School alums, who this time last summer were about to head off to college.

Kevin graduated from North High School in 2018, and took many of his courses at Central. He was scheduled to start his sophomore year at ISU, where he was studying computer science.

Those milestones in his young life are notable, but not what people think of when they think of him.

Early on the morning of July 4, 2019, Kevin died in a hit-and-run automobile accident on the Northside. A suspect has since been arrested.

He was remembered at a vigil on Friday afternoon that filled the lobby at Central Academy with mourners, from former classmates and teachers to family and friends and community members.

Central Academy is a place where achievement and spirits generally run high. But, “This is a low moment,” said CA Director Dr. Jessica Gogerty, who described Kevin as someone who “lit up the room with joy.”

A few others took the opportunity to speak to the group, classmates who all echoed Gogerty’s portrayal of Kevin as someone joyous. They recalled classroom horseplay and regularly beating him in Monopoly on game night get-togethers.

Many more wrote messages of condolence for Kevin’s family and one another on a scroll posted in the hallway.

One thanked Kevin for his help in a math class and was signed with an equation. If only there was a formula for making sense out of random tragedy or a map that charts the way through grief.

Another quoted Mark Twain’s assertion that, “The two most important days in your life are the day you’re born and the day you find out why,” and thanked Kevin for showing the writer their reason why.

“The Des Moines Public Schools Exist So That Graduates Possess the Knowledge, Skills and Abilities to Be Successful at the Next Stage of Their Lives.”

Kevin Truong personified accomplishment of that mission. The entire district extends its sympathies to his family and friends, and shares in their sorrow. 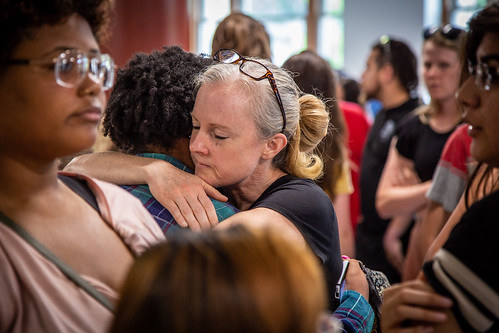