Jazz Gypsies from ‘Frisco Make a Stop at DMPS

Kindergartners at Brubaker Elementary School were treated to what, for many of them, was their first concert Friday afternoon in the school gym.

In town for a Civic Music Association “Cool Yule” concert at Sheslow Auditorium on the campus of Drake University Saturday night, the Hot Club of San Francisco visited both Brubaker and Madison Elementary for tune up sessions with DMPS students.

“The Civic Music Association brings in world class musicians from around the globe,” said Kelly Kretschmer Schnackenberg, the DMPS Fine and Performing Arts Curriculum Coordinator. “CMA also tries to provide opportunities to as many DMPS schools as possible, so we try to ‘spread the wealth’ across the entire community. Sometimes the education committee at Civic Music inquires about specific buildings, other times it’s teacher-driven. I put out the offer at the beginning of the school year of who would be interested in hosting guests throughout the year.”

“Kindergartners don’t get to do a lot of the fun stuff like fieldtrips,” Sampson said. “I thought this would be something fun for them.”

For the guest artists it was a chance to make a lasting impression. Saturday night they preached to a choir of jazz fans at their main event. Friday they introduced some musical newbies to jazz, swing, blues – even some French!

Band member Isabelle Fontaine was born in France. She put her guitar aside to lead the kids in singing a popular French song, C’est si bon. Right on their cues, the kindergarten backup vocalists chimed in “si bon, si bon (so good, so good).” Si bon, yes it was.

Paul Mehling, who many consider the “godfather of gypsy jazz,” (gypsies, he told the kids, are wanderers) is the group leader and he tried his best to open the performance up for some Q&A. Many hands shot up, but most of the ones called upon had comments to make rather than questions to ask.

“Your music feels like my brother hugging me,” it sounded like one boy said. Score at least one future jazzer in the crowd.

In addition to Friday’s appearances by Hot Club of San Francisco, the local CMA artists in residence who comprise the Belin Quartet are also making a mini-tour of the district. Last month the string ensemble visited Hubbell and King elementary schools and this week they’re slated at Oak Park and Findley.

An especially bouncy rendition of Santa Claus is Coming to Town was the final tune at the Brubaker kindergarten show. In just a couple of weeks, hot on the heels of the Hot Club of San Francisco!

Photos of Hot Club of San Francisco Visit to Brubaker 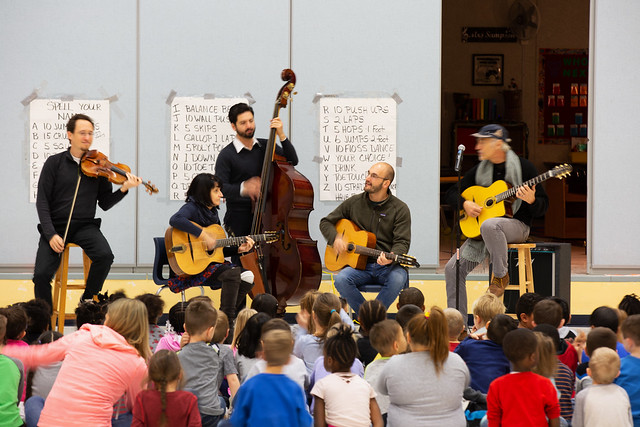