ISU 4U Promise Program Keeps Its Promise to Students

No sooner had the mailman left her front porch Friday afternoon than another, more special delivery arrived at Lennetta Scott’s house.

When she stepped out to collect the day’s mail, Lennetta was truly surprised by the parties representing ISU 4U Promise, the program that promised five years ago to pay her tuition upon acceptance at Iowa State University.

The tuition part she’s been counting on since her 8th grade year at Moulton. She worked hard to fulfill her part of a grand bargain and earn it. But the balloons and applause and swag bag and yard sign and backslaps and handshakes on Friday? Those were unexpected.

Shari Miller is the ISU 4U Program Coordinator and she spearheaded the Publisher’s Clearinghouse-ish blastoff for the 13 Moulton alums who’ve been counting down the days until they head off to college in Ames. A group made up of Moulton and ISU staff and community stakeholders met at the school before fanning out to put up posters emblazoned with the names of the trailblazing students at area businesses and surprise the students themselves at their homes and workplaces.

“In a Moulton liaison team meeting at the end of the school year, the teachers expressed an interest in doing something in the community to honor these former students of theirs,” Miller said. “They are bringing an idea to life and everyone involved is excited for them.”

The idea was Ako Abdul-Samad’s, the founder of community nonprofit agency Creative Visions and a former School Board member who now who represents the Moulton and King school neighborhoods in the state legislature. He first pitched a tuition defrayal incentive for students at those schools, many of whom are potential “first gens” in their families to attend college, to then-ISU president Steven Leath in 2013. An agreement was formalized in 2015. Dr. Leath has since left Iowa State, but his successor, Wendy Wintersteen, made a point of reaffirming the ISU 4U Promise shortly after she was named to her job. Dr. Wintersteen visited the schools last spring.

The essence of the program is that Moulton and King students earn 20% of tuition at ISU for each year of attendance at those schools, provided they eventually graduate from a DMPS high school and meet the regular criteria for admission at Iowa State. Five years of attendance at either Moulton or King = a full tuition award!

In 2013, Moulton was nearing the end of its transition from a K-8 school to K-5. This initial baker’s dozen batch of ISU4Uers were all members of that last 8th grade class. Since there were no 6th or 7th graders at Moulton that year, the next cohort to benefit from the innovative program won’t graduate from high school until 2021, but it will be much larger than this first one.

“Currently there are somewhere between 80 and 100 Moulton and King students who are eligible to be part of that next group,” said Miller. “This is going to grow. This is just the beginning.”

Friday’s surprise gestures were a sendoff, but not a goodbye. Each of the students is assigned a DMPS mentor in addition to the supports that Iowa State plans to offer them upon arrival on campus. Their parting gifts included personal cards from people who helped them get this far and want to see them make it the rest of the way.

“Teachers who had these kids when they were here will be contacts for them in college,” said Jackie Kohler, who teaches 5th grade at Moulton. “Some of them have since moved on to other schools, but they want to continue to support these former students of theirs.”

So a seed planted five years ago has come to fruition, like tomatoes that are turning a Cyclone shade of red all across the state this month.

On August 15, Lennetta reports to begin her pre-law studies at Iowa State. There are plenty more where she and the rest of these Moulton Cyclones came from:

Photos of the ISU 4U Promise Send Off Celebration 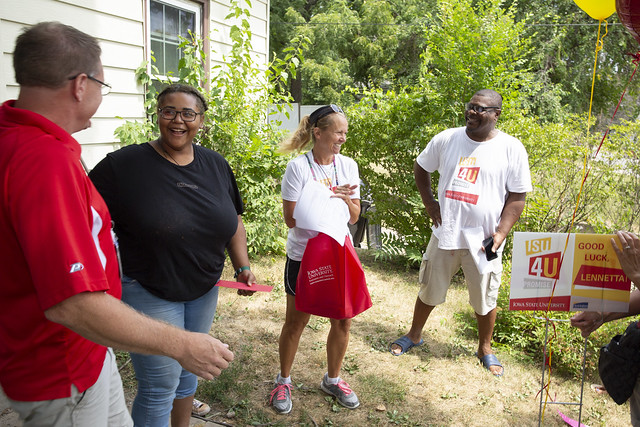