Central Campus is a many-splendored place, the nexus of the state’s biggest, brightest and broadest school district. Every spring that point is remade during a “Block Party” that runs a whole week because it takes that long just to scratch the surface of all that CC has to offer.

This week marks the 6th annual showcase and it began on Monday night with the opening of an art show on the 3rd floor. Tuesday night an open house featured programs from top to bottom; from Home Building on the 5th floor to Auto Technology down in the newly remodeled basement. In between they were feeding stingrays and dissecting sharks in the Marine Biology lab, checking blood pressures in the Nursing Assistant wing, making pasta in the Culinary Arts kitchen, and practicing Army JROTC drill team choreography in the gym – just to cite a few of the attractions.

The purpose of the open house is dual: 1) To show off the work produced by current students (the evening includes an awards assembly in the auditorium) and 2) To lure future students into the career and tech arcade by sparking imaginations of personal futures.

Refreshments were available throughout the premises, including free popcorn in the library! Student pottery was for sale with proceeds going to a local charity. Programs housed at the district’s outer limits on County Line Road (aviation, horticulture and animal science) brought plants and animals and plane parts.

Central Campus introduces students to careers both traditional and cutting edge. Many programs train workers to fill current shortages in skilled trades like welding and plumbing while new areas of instruction emerge in concert with the times – cybersecurity, for instance.

Thursday night it all culminates with the always-popular fashion show produced by the Fashion Design & Merchandising program that punctuates the weeklong party with a finishing flourish.

From old-fashioned military marching to high-fashion runway modeling – high school isn’t supposed to be this eclectic. Wait, maybe it is. 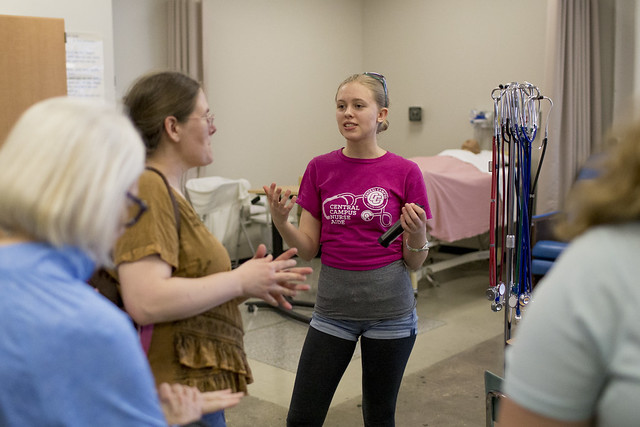