Countries of Birth for DMPS Students

DMPS: The Educational Home to Students from Around the World 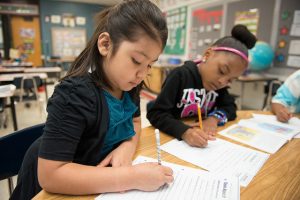 Des Moines Public Schools is the educational home to students from around the world.

It’s well known that Des Moines Public Schools has the largest English Language Learner programs in all of Iowa and one of the best in the nation. With more than 6,000 ELL students speaking nearly 100 languages and dialects, DMPS in many ways is a microcosm of the world.

But, where do our students come from? Which nations were their first home?

While information about student’s country of birth is not required to be enrolled in school in Iowa, DMPS and many other districts do request it as part of a home language survey in order to best serve students who may need ELL services.

Based on data for more than 18,000 DMPS students, 88 different nations are represented in the hallways of our schools.

The countries represented are literally from A to Z, or from Afghanistan to Zimbabwe.

Eighty-six percent of the students included in this data were born in the United States.

But which nation, other than the US, is most represented by students?  Thailand, Mexico, Tanzania, Nepal, El Salvador and Ethopia.

The map below provides a look at which country is the place of birth for our students in Des Moines. To download a copy of the data represented in the map, click here.