When a student arrives to begin the school day, we only get a glimpse of what life is like during the other seventeen hours they are not in the building. The obstacles many students face just to participate in school and activities are written down and talked about, but rarely experienced by education professionals. One high school soccer coach answered a challenge to spend the entire day with one of his players and wrote about the experience. The following story originated from a Facebook post written by Leland Schipper, North High School instructional coach and boy’s soccer coach, on Wednesday, January 4, 2023.

I’m writing this before I go to sleep after one of the longest days I’ve ever experienced. Today, I decided to walk in the shoes of one of our students at North—one of the young men I get the privilege to have on my soccer team. MJ gave me permission to share about our day together and about some of his story. MJ is a Sophomore at North and I’ve been able to get to know him over the last year by giving him the occasional ride and sharing some good lunch conversations. During one of those talks over lunch, I challenged MJ about him getting to class on time in the morning and MJ looked at me and said, “Coach, I will do better, but you couldn’t do what I do.” While I knew MJ, and many kids I work with face real obstacles, I was relatively sure I was fully capable of doing what MJ does.

By the end of the day, it was clear to me that MJ was right, I wasn’t.

I spent from 6:30 AM to 11:15 PM on an epic adventure with MJ, also known as a normal Wednesday for MJ. Our day started at 6:30 AM on the farthest NE side of Des Moines—so far away it was difficult to believe it was still in our school’s boundary. I parked my car and met MJ at his apartment where we walked together in the sleet and snow to the bus stop about five minutes away. MJ laughed that I was carrying two bags and not wearing anything to cover my face. He offered to carry my bags and let me wear his scarf. I declined but was jealous of his scarf. We waited about ten minutes at the bus stop because the DART was running a few minutes behind, but finally made it on. MJ laughed at me for shivering and said, Coach, I lived in Egypt my whole life until two years ago, and I’m not cold. This was one of the many times MJ would laugh at me. MJ is Sudanese, but his mom and siblings fled Sudan due to the brutal civil war there right before he was born. He is constantly smiling and making jokes. His English has improved significantly over the year I have known him, but his jokes are still sometimes difficult to understand. Honestly, the content of his jokes doesn’t matter, it’s MJ’s joyous delivery that gets the laughs every time.

As we rode our first bus towards the downtown central station, MJ explained to me that this early bus doesn’t make many stops so we will get there early and have to wait. The later bus he often takes usually runs behind because it is full. Throughout our bus journey, I followed MJ like he was my guide in a city I have lived in most of my life. We waited in the warm central station for about 20 minutes to get on our next bus to take us to school. The presence of a police officer pacing in front of us at the DART station created an unusual tension for my day by 7:15 AM. MJ laughed when he saw me looking at him and said, “Coach, you didn’t do anything, so it will be okay. A guy got handcuffed sitting next to me last week, but I don’t think it feels like that kind of morning today.”

We got to the school by 7:40. That is about 45 minutes before school starts. MJ pointed out there was no one else there yet and told me his choices are either to be this early, or to be 5 minutes late. I started to understand why he chose 5 minutes late so frequently.

I followed MJ throughout the day. We had school breakfast together, I attended several of his classes, waited in the super long lunch line after we got sent back to the end of the line when a campus monitor caught us trying to cut the line. (That really happened—but I was just trying to follow the true MJ experience) We ended up only having about ten minutes to eat after waiting in line and talking to some of his friends and teammates.

To give you a better picture of who MJ is, during one of his classes, he was supposed to write in detail about his best and worst part of break. He didn’t like that his teacher wanted to know so many “personal details” so he made up a story and wrote about attending a funeral for his cousin in Grinnell—he put a fair amount of detail into his convincing account. Yet, his cousin is alive and well. He said the teacher always gives better grades when he writes about sad stuff, so he thought the cousin story would work and was at least “B work.”

After school MJ and I split up for a bit. I had a few things I had to do in my office, and MJ wanted to go home for a bit to grab a few things he forgot for soccer. Most nights MJ doesn’t go home until about 9-10PM, but he decided to ride the DART bus about two hours round trip to go home for 30 minutes to grab his soccer shoes and meet back up with me at the Downtown Y. In the meantime, I had no car and had to get myself to the YMCA on my own with very little MJ facilitated DART training.

I missed the bus.

It was a cold mistake. The soccer team sent pictures of me in the group chat with captions “Coach is going to freeze” and “RIP coach.” MJ just laughed at me when I finally made it downtown to meet up with him and another player at the YMCA. The YMCA is safe, warm, and gives MJ a place to be alone with a soccer ball. He sometimes plays with friends, but usually, he just listens to music and plays with a soccer ball in a racquetball court—often for hours. In his words, “I just like being alone with a ball.”

After the YMCA, we hopped back on a bus to take us back to the school for Open Gym from 8-9:30. Bus 15 was starting to feel more comfortable to me at this point, but it was nice to be with MJ this time, knowing he would pull the string at the appropriate time allowing me to relax a bit compared to my solo ride earlier.

There have been nights where MJ didn’t make it to Open Gym at 8 PM on weeknights. He often does, but he sometimes would tell me he was too tired and didn’t have a ride. I regret that my response had often been, “Come on man, the DART bus is free for students this year. You’ve got no excuse!” It is free, which is incredible, but it’s a lot more complicated than that; I see that more clearly now. At Open Gym tonight, MJ and about 50 of his teammates played soccer in the two gyms at North. I enjoyed watching them more than ever. I found a different appreciation for the beauty of them all finding their way to a practice at 8 PM on a Wednesday when only a handful of them have cars. MJ played with more joy than anyone–joking with teammates, scoring goals freely, and looking at me after each goal.

After open gym MJ and I picked up the equipment and headed back into the bitter cold to catch a 10PM bus back to downtown, where we sat and talked for 30 minutes about his life in Egypt as a refugee. He showed me videos of him playing soccer as a 12-year-old at his refugee camp in Egypt. They were news clips in Arabic from a news story SKY News had published at that time reporting on the Sudanese refugees fleeing the war in Sudan. MJ translated them for me as we watched. They were fascinating glimpses into the formative years that created such an incredibly resilient and joyous kid.

Finally, we got on our 10:48 PM bus out to his apartment complex. MJ could tell I was tired and said, “Coach, you can sleep. I’ll watch your bags.” I didn’t fall asleep, but I could have.

When we got to MJ’s house at about 11:15, we walked to his apartment, I gave him a hug and thanked him for letting me join him for the day. He smiled and thanked me too. Then I said, “But, you still need to be to 1st period on time tomorrow.” MJ laughed and said, “Of course, coach.”

All that to say this: In three months, when you see a post on the North High School Boy’s Soccer page about MJ scoring a goal in a big game, it will represent a lot more than most Iowa high schoolers scoring a goal. And in two and a half years, when MJ walks across the graduation stage, it will mean even more.

MJ turns obstacles into skills and finds joy in every moment of the process. It was deeply inspiring to have a front seat to it today. 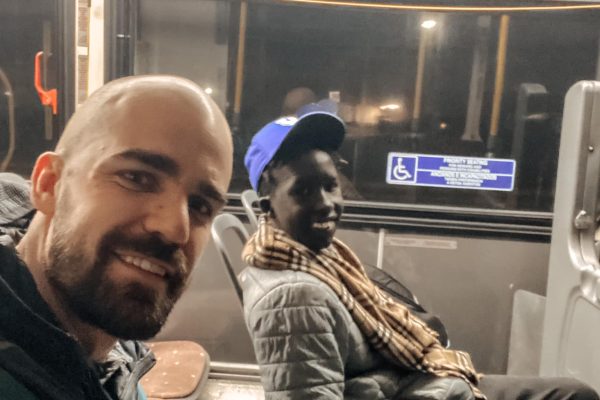