Instead of brisk temperatures and the crisp, colorful leaves of fall normally associated with a homecoming parade, students at Ruby Van Meter wore short sleeves and felt the warm spring sun on their faces as they cheered on their graduating classmates outside.

COVID may have quashed the traditional fall setting, but Principal Cindy Weisz said her staff wasn’t about to let it cancel homecoming.

“This is pretty exciting,” said the principal. “We have some really creative staff who thought outside the box to get this done this week.”

The fun started Monday with dress-up Spirit Days, featuring themes like favorite decade, pajamas and slippers, Hawaiian beach,  mismatched clothing, and school colors. Instead of rallies in the gymnasium, students shared their festive looks in their classrooms. Virtual students participated from home.

Kicking off the festivities on Friday – the homecoming parade. Everyone gathered outside the school and some of the virtual students were able to attend in-person. Students marched around the circle drive, some participants carrying signs and playing percussion instruments as fellow classmates cheered from the sidewalk. A staff member made sure a laptop captured the action for students watching via video. Another stopped to blow bubbles at the camera to share an extra pop of joy with those cheering from afar.

Principal Weisz marched at the front of the parade staff retirees, the staff- and student-made poster she carried designating her “Leader of the Pack.” And what a year to be a leader.

“I just think this has been a year of so many challenges, but my staff, my students, and my parents all stepped up to make student learning amazing this year,” Weisz said. “It wasn’t the same as being all together in person, but I think they knocked it out of the park.”

The homecoming coronation was smaller and socially distanced inside the gym. Students watched via video conference from their classrooms or from home as the results of their earlier voting were announced.

Fabiola Orellana, known among students as being friendly, smart and sweet, with a huge heart, became Homecoming Queen.

Matt Rothfus, known for being a prankster with a quick smile and a heart for helping others, became Homecoming King.

Both students and several others will walk across the school’s stage on May 28 during a socially distanced commencement. Weisz hopes the next stage of their lives is as meaningful and exciting as their Ruby Van Meter experience.

“They’ve been with us, some of them, for 12 years,” she said. “We hope their experience here has been amazing, but this is only one part of their lives. There’s so much more beyond what we have here.”

For today, it was all about the celebration with a picnic, dance and kickball planned to round out a week of sharing school spirit on what turned out to be a beautiful day.

“We had a great week full of school spirit and fun!” executive secretary Celia Nelson said. “Keep an eye on the Ruby Van Meter Facebook page for Homecoming Week pictures.” 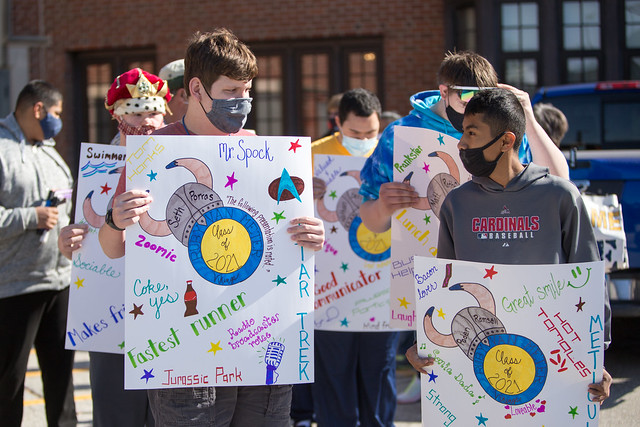