Their cause was the reinstatement of what they see as their right, but the governor has decreed is a privilege, to participate in various extracurricular activities that are already underway before the academic school year officially begins tomorrow.

Last Thursday the governing bodies of Iowa high school sports, acting at the behest of the Iowa Department of Education and the Governor and their reopening criteria for Iowa schools, suspended fall sports seasons for DMPS high schools indefinitely.

Over the weekend, a groundswell of pushback arose amongst Roosevelt coaches and athletes that quickly spread to the other four comprehensive high schools via social media and Monday’s event was organized. All five high schools were represented in the ranks of marchers, along with students from Ames and words of support from Iowa City, two other school districts that have seen extracurricular activities halted because they also took steps to provide a safer start to the school year.

One of the student leaders was Roosevelt senior volleyball player Tabby Keith. She stressed the notion of fairness, a cornerstone of both interscholastic sports and the case the student-athletes are pleading.

“We feel like we’re being used as pawns in a political battle,” she said. “It’s unfair for us to be punished by the state because our school district took a position on virtual learning in opposition to the governor. Virtual learning makes sense in a school where 2,000 students would be crowded together, but our team is only 14 girls in a big gym. We wear masks, sanitize frequently and practice social distancing as much as we possibly can. Plus, sports are voluntary activities and classes are mandatory. I don’t want to lose my senior season after all of the work all of us have put in.”

Cross-country, boys’ golf, football and girls’ swimming teams, along with volleyball, were all practicing for weeks before their seasons recently began, only to have the state arbitrarily call timeout just as the athletes were hitting their strides.

The orderly two-and-a-half-mile procession from Roosevelt, which included parents, younger siblings, coaches and teachers besides student-athletes and musicians, was punctuated by bull-horned cadences and calls & responses like “Let us play!” and “What do we want? Fairness! When do we want it? Now!” Placards bobbed above the crowd. Some were catchy and demanding (“Let us swim, Kim!”). Others were beseechy and polite (“Please let us play!”).

When the throng reached Terrace Hill it was met by state troopers determined to keep the protestors off the governor’s grass. Reynolds did not appear but if she was home, she certainly heard the chants coming from her front sidewalk.

The 2020-21 school year begins at DMPS on Tuesday with virtual learning at all levels except for a limited number of hands-on laboratory classes at Central Campus and in-person learning for some special education students. Early this week is also when a Polk County District Court judge is expected to rule on the school district’s request for a temporary injunction to set aside the state’s mandate for in-person classes. A favorable ruling there could also be a win for all of the DMPS fall sports teams AND marching bands, including the ad hoc one responsible for Monday’s holiday parade. 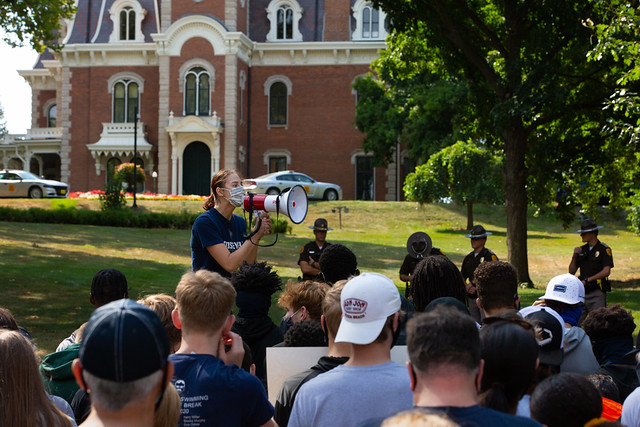