Audiologists Making Sure No Child is Left Behind

Remember No Child Left Behind?

It didn’t exactly work out as federal education legislation, not nearly to the extent that the ethos it suggests drives services provided by Des Moines Public Schools, pandemic shutdown notwithstanding.

Not only does the foursome deliver a range of services to district students, they also extend them to any child who lives within district boundaries, from birth to age 21, provide professional development training for district teachers AND somehow service 15 area parochial schools, too!

“Yes, DMPS is unique in this service,” said DMPS Health Services Supervisor Diane Gladson. “Most districts utilize their AEA to provide audiology services. We screen the following grades each year: Head Start, Universal Preschool, Kindergarten, 1st, 2nd & 5th grades. We also screen outside of these grades if a student has a hearing concern.”

A second component of hearing screenings is through the Iowa Early Hearing Detection & Intervention Program, which provides newborn screening to anyone within DMPS district boundaries and early intervention diagnostics.

“Taylor’s had a hearing deficit since birth,” said Wears. “Since she got into HAT three years ago it’s just been a godsend.”

The district provides devices for students who require them. The audiology team and teachers provide the human touch that makes them effective.

Waymire tested Taylor’s hearing both unaided and with a microphone system like her teachers would wear that transmits their voices directly to Taylor’s hearing aids. Ambient background noise was simulated, but Taylor did well under all conditions.

“HAT even transmits directly to Taylor’s computer,” her mom raved while Taylor delivered her own endorsement in the form of flawless sentences she recited back to Waymire during a call/response exercise.

Christy joined DMPS fresh out of her graduate training two years ago.

“At Vanderbilt we had a rotation in Educational Audiology,” she explained. “I knew that was what I wanted to go into.” She dove in just like she did as a diver on the women’s swim team during her undergraduate days at the University of Iowa.

Waymire, who has hearing loss herself, had some clinical experience before joining the district three years ago.

“I wanted to have more contact with children than I was getting there,” she said. “I wasn’t identified until I was three years old and I hated my audiologist when I was growing up. I thought I might like to be a veterinarian but my dad suggested I’d be good at this.”

He was right, it’s clear after watching her rapport with Taylor whom she put at ease even with visitors present. The facilities at Capitol View are sized for one-on-one sessions which belie the vastness of the audiology team’s charge and jurisdiction.

Johnson is the only team member who’s been here since the beginning of the program seven years ago.

“It’s grown a lot since then,” she said. In terms of students served, she means, but not in terms of human resources. They could use some help helping students hear what they’ve been missing.

“It’s our kids we’re talking about,” said Wears. “Programs like HAT and the people who make them work are just wonderful and make such a difference.”

Maybe one day the powers that be won’t turn such deaf ears to pleas for additional school funding. In the meantime, one of the sentences Taylor recited back at Waymire word for word applies to all concerned:

“She wore a feather in her cap.” 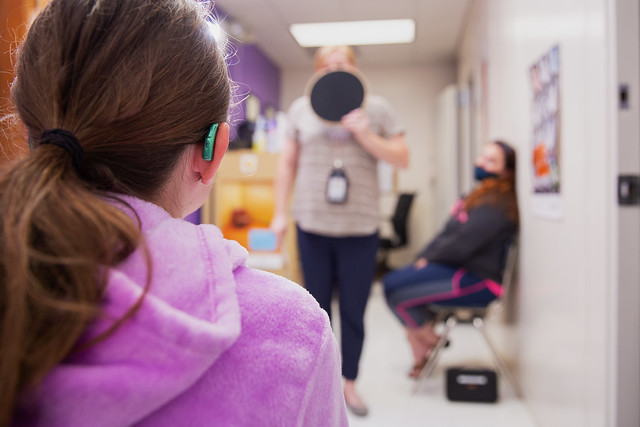