Back in mid-March, during what was originally scheduled as Spring Break for DMPS but has since turned out to be more of a sabbatical or leave of absence, we shared a story about how life would go on swimmingly for the laboratory creatures at the Central Campus Marine Biology /Aquarium Science program.

Now, in late July, instructor Dr. Greg Barord has found a novel way of scratching his itch to get back to teaching. This fish out of water has adapted.

He calls it “sidewalk science,” a mix of 21st century pandemic ingenuity and old-fashioned chalkboard lecturing. While a lot of learning this Fall will take place online, Dr. Barord’s summer lessons are more on the ground.

“With so much stress, fear, and uncertainty with many things right now, I woke up one day and started drawing some things with chalk on my sidewalk,” Barord said. “I’ve been sharing them on different media platforms, including our program’s social media accounts. It’s been a fun way to interact with my neighbors and former/future students online.”

Midwestern kids typically while away summertime downtime by observing local wildlife like bugs and nightcrawlers. This year, the ones in Barord’s neighborhood are getting at least a peek at oceanic species like squids and octopi.

Dr. Barord usually spends a good portion of the summer months underwater. Scrawling lessons on cement is about as far from an aquatic medium as one can get, but he has discovered another bit of treasure in the midst of this sunken summer. Besides the passersby in his neighborhood, Barord’s official students have upped their games while helping out at Central Campus.

“Students are doing great in the lab,” according to Barord. “It is definitely different for them, but it’s a testament to the work they put in all year to be able to step up in a huge way and become even more responsible and accountable. We’ve cut way down on the number of students and have a strict schedule to keep groups separate from other groups, and of course, they are all wearing masks and maintaining social distancing. In a strange way, the lab overall seems better maintained than ever this summer.”

Not only that, but the years to come may reveal a school, so to speak, of marine bio students originally recruited through an unofficial summer school class in “sidewalk science.” Occasional rain erases Dr. Barord’s lessons, but the impressions he’s making may prove indelible.

Click here or here to see more of the sidewalk lessons. 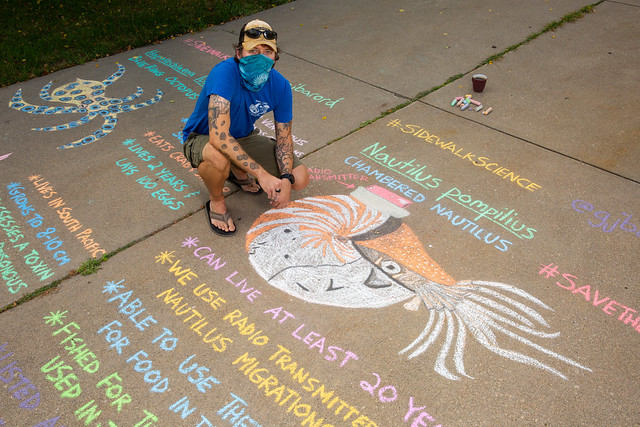