A dynasty is defined as a succession of people from the same group or family who play a prominent role over a long period of time. History is full of examples, from monarchs and politicians to business titans and sports teams.

By any definition, the North High School JROTC Air Rifle Team is a dynasty.

This week they are leaving for the U.S. Marine Corps Air Rifle National Championships in Anniston, Alabama. It is the 18th year in a row North has qualified for this national competition.

On the morning before leaving for Alabama, the team gathered to practice at their indoor range on the second floor of North. Most days that means being to school by 6:30 AM. The large room, festooned with banners from years of success at a variety of tournaments, is mostly quiet except for the pop of the air rifles and advice from Gunnery Sergeant Mike Gettler, one of North’s JROTC instructors and the team’s coach.

The team practices from the three positions they will use in competition – prone, kneeling and standing – as they perfect their ability to hit each of ten targets arranged in an area no bigger than a piece of paper at the far end of the range.

Afterwards Gettler pulls aside the five members of his squad who will compete at the national championship: seniors Akar Paw and Arturo Zaragoza, juniors James Masteller and Ayden Wells, and sophomore Tha Dah. North is one of 18 teams from across the country who qualified for the event; the Polar Bears are the number 4 seed. But listening to the coach and his team, it’s clear they are aiming (literally and figuratively) for something more.

The national championship is far from the end of the season for North. The team will be traveling to a variety of state, regional and national competitions throughout the spring. Some team members may even qualify to head to the U.S. Olympic training center this summer.

A walk through the school gives an immediate visual clue to the team’s success over the past two decades. Trophies fill shelves in the school’s main display case, are lined atop filing cabinets in the range, and fill nearly every inch on top of bookcases in the JROTC classroom. But the title of the textbooks lined up underneath the trophies give a clue to the real reason behind the dedication and success of these students: Leadership Education.

Over the years, graduates of North’s JROTC programs have gone in different directions. Some have joined the armed forces while most go on to college or join the work force. A few even continue to compete on air rifle teams. But one thing is certain for each of them: they are part of a dynasty. 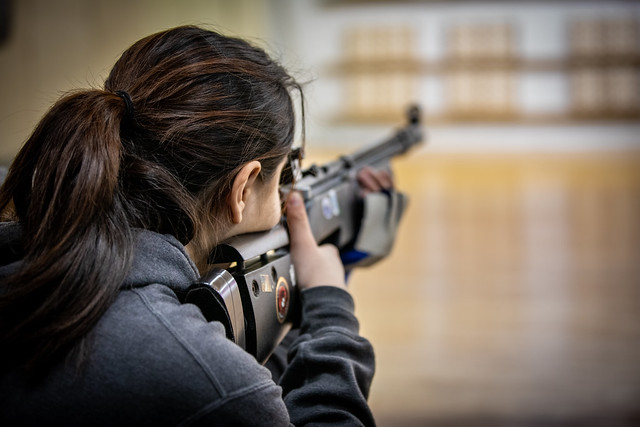