“It Gets Better” With a Little Help from DMPS and DMPA

Des Moines Public Schools and Des Moines Performing Arts are partnering this week (again) to spread a simple but powerful message to LGBTQ youth in the community: It Gets Better.

IGB began in 2010 as a social media campaign in the wake of a spate of teen suicides. In the space of a decade, it’s mushroomed into a global multimedia phenomenon. The artistic branch of the movement tours the country under the auspices of the San Francisco Gay Men’s Chorus and is making the rounds in Des Moines through a series of sessions that includes assemblies and roundtable discussions at each of the five DMPS comprehensive high schools. Workshops are also scheduled with district administrators and school faculty. The troupe’s visit will culminate with a performance at the Civic Center on Saturday night that will include voices from all over town.

Tuesday morning the busy itinerary had the group at Lincoln High to sing songs from the upcoming show, share personal testimonies to the notion that It Gets Better and dialogue with students from not only Lincoln but also McCombs Middle School.

In between songs like Secrets and Less Than Perfect, cast members shared their experiences growing up and discovering their sexual identities. They recalled the joy and relief of realizing that religious and gay aren’t mutually exclusive traits, and that sometimes the last person in the family to realize and accept that one of us is gay is the gay one.

The San Francisco Gay Men’s Chorus began the gay choral movement in 1978, performing in public for the first time at an impromptu concert at City Hall after the assassination of openly gay San Francisco City Supervisor Harvey Milk. The group does not require that members identify as gay or bisexual. The eligibility requirements for SFGMC are to be at least 18 years of age, to self-identify as a man, and to pass the audition process.

A Q&A session followed the music and the backstories at the Lincoln assembly in a program that was equal parts musical theater and documentary, but instead of the guests fielding questions from their audience, it was the other way around. The performers wanted to get a sense of what it’s like to be an LGBTQ teen in Des Moines in 2020.

Students at both schools said they feel supported by faculty and that progress is happening. Most DMPS secondary schools have GSAs (Gay Straight Alliances) and gender-neutral bathrooms.

So far, the IGB tour has reached 15,000 students in 18 cities across the country.

Besides the high school assemblies throughout the week, DMPS students are welcome at a piano cabaret in conjunction with Drake University’s Rainbow Union where students will have the chance to meet more members of the touring company and sing a few of the show tunes on Friday night.

The visit culminates with the public performance on the Civic Center stage Saturday night at 7:30 PM. Students involved in their school GSA organizations are eligible for free tickets and local choirs will join the cast onstage for the final musical number in the most poignant moment of the show.

That finale, More Friends Than You Know, sounded powerful sung by a septet in a partially filled auditorium at Lincoln on Tuesday. By Saturday night’s crescendo at the Civic Center, everyone there should have an idea of just how many.

Photos of “It Gets Better” Assembly at Lincoln High School 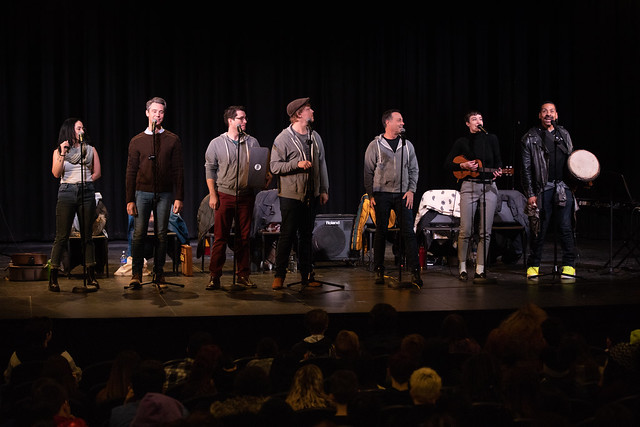